Which web sites do you check daily?

Nanducob said:
reddit is baned in this tread m8

Read the OP guise no forums too D:

Now when is the final list compilation coming out? 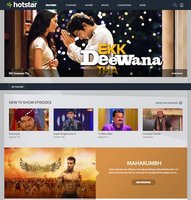 Hotstar seems to include all of Star India’s television and sports offerings along with offering Bollywood & regional movies from other studios. It’s worth noting that Star India already has dedicated video streaming sites like Star Player for television episodes and Star Sports for paid livestreaming of sporting events. So, we’re not sure of what Star India plans to do with this service. Does Star?

Will Star Player and Star Sports continue to co-exist with Hotstar, or will Star India start directing users to this new property? The company has launched video portals in the past to shut them down: both Indya on demand and Video on the rocks (launched in 2007) are now defunct. Update: As anticipated, Star Player has started redirecting users to Hotstar while Star Sports is still live at the moment.

The site seems to be still in the works, since some links were broken while some videos were not working at the time of writing this article. Certain sections didn’t feature any content when we checked yesterday, however the company seems to have fixed it today morning.

Hotstar offers TV Shows and movies across six Indian languages including Hindi, Kannada, Tamil, Bengali, Malayalam and Marathi on the web and through iOS and Android apps. For TV shows, it offers the latest episodes from ongoing television shows & episodes from classic television shows on its group channels like Star Plus, Life OK, Channel V and Star Vijay among others, while for movies, it offers Bollywood titles like Bang Bang, Dabangg 2, Kahaani, Housefull 2, Golmaal, Fukrey, Jai Ho and Phas Gaya Re Obama among others and regional movie titles like Classmates, Nanban, Mussanje Maatu, Aptharakshaka and Galipata among others.

It also offers videos from cricket tournaments and other professional sporting leagues like Pro Kabaddi and India Super League (Football). It will also likely include videos from Indian Badminton League and Hockey India League among others, for which the company has streaming rights. It’s worth noting that Star is betting big on sports in India, having stated plans to invest Rs 20,000 crore to expand its sports coverage in the country.

Star India is also claiming the ownership of Cricket scores & prevent ball by ball commentary online and on mobile and is currently fighting the Hot News case in the Supreme Court of India (Read our Hot News coverage here). It’s possible Star India could use this to attract potential viewers and advertisers to this property in the forthcoming sporting events.

Subscription? It’s currently not clear how Star India plans to monetize this site, since it is currently allowing users to view videos for free without registration. One can also sign up for the service to download these videos on their mobile phones for offline viewing. The company is however most likely to opt for a subscription model like Spuul, BoxTV and others.
Click to expand...

Nerevarine said:
Im curious how many of you use fb daily ? Im a college student and i feel FB is just non productive hogwash, but my friends are insane for it, hence im forced to follow
Click to expand...

off it since 2009, new year resolution. Friends or no friends, stuck to it.