Should I trust there ratings?

Hi, I have a Zebronics case which includes a PSU. Now, I'm not sure weather I should trust these power ratings or not. I usually add led'd and other devices in my PC as part of my modding interest, so I need to know the Amperage of all lines. Should I trust the printed power ratings? 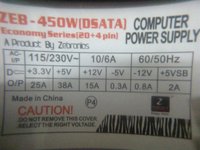 How about you post your full system specs?
OP

For some reason,i cant see the pic,how much is the power rating?If your system is running fine on that psu,i believe adding few led's wont do any harm.
OP

The Amperage ratings are:

And yeah, the system is running fine.

If u OC it,it will be even better
Click to expand...

OC what, the GPU? well I've already done so. I'll try running some games with the integrated graphics for a comparison.
R

How about you spend 2k and get a new branded psu?

OH LORD ..when will these goddamn, cheap chinese importers, stop getting these P3 era supply's re-labbeled ones when clearly some of the other generic ones(Umax) are doing better.
Just look at the +5V amp rating...38A ..and look at the 12V rating...less than half..pathetic..seems that they simply forgot that P4 onwards its the 12V that needs to be nourished well.

@@ OP: This is a joke of smps, I wont take those ratings for serious. Though it may apparently appear to run fine please have no second thoughts that these are the crappiest psu's out there.
There is already a list of blacklisted PSUs on this forum. Pls give a read.
OP

I'll be buying a Corsair CX430 or CX500. AFIK h61 chipset doesn't support overclocking, or am I missing something?And if it does support integrated graphic overclocking. please link a good tutorial.

^^ gud for you.
He means ocing the on die GPu and Not the CPU itself.
The asus model he own offers one and hence was reccomending the same to you.
OP

I'll post synthetic and real world benchmark results in a day or two, will have to wait till tomorrow for downloading drivers. Do stay tuned.
OP

I switched over to i3's integrated graphics, and the performance gain was was clearly visible.
The WEI score for Desktop graphics Performance increased from 4.6 to 4.8 and that of Business and Gaming graphics from 5.2 to 5.6.

The score in MSI Kombustor also increased noticeably (I've lost the readings of GPU test) and frame rates in BF3, Driver San Francisco and NFS most wanted also increased by about 5 to 10 fps.
I guess I'll sell my 8400gs as it would increase my funds which I'm collecting for GTX 650.

No, you shouldn't. And that too from cheap makers.
OP

What shouldn't I? Are you saying that I should not buy GTX650?
J

^ He is saying you should't trust your psu. Its a cheap quality product and not a reliable solution.

harshilsharma63 said:
Are you saying that I should not buy GTX650?
Click to expand...

Yes you shouldnt. Get the R7770 instead which is a better performer and comes cheaper.

Jripper said:
^ He is saying you should't trust your psu. Its a cheap quality product and not a reliable solution.
Click to expand...

If you can find a GTX 650 Ti under 10K, get it eyes closed, but dont bother with the non Ti version.. If you cant find, get Gigabyte/MSI HD 7770 from smc for 7.9K
But remember, you need a good PSU first, the cheapest solution is CX430v2
However, take a look atGigabyte PoweRock Power Supply, 80Plus Certified, True 550W 550 Watt SMPS i5 i7 | eBay

Even though no one uses it, It has got some good reviews in websites.. Also it is more futureproof than CX430v2 having the same price and being a gigabyte product.. you neednt worry about warranty as long as you have a service center in your area
You must log in or register to reply here.
Share:
Facebook Twitter Reddit Pinterest Tumblr WhatsApp Email Share Link
Top Bottom