Safari 4 slows down, now behind Chrome

Perhaps the absence of Apple CEO Steve Jobs, or any hint of his existence, will go down as the biggest disappointment of this year's WWDC conference in San Francisco. But it may be on the top of a list of more than one item, and down that list not too far behind Jobs' no-show, there is this news: The final release version of Safari 4 is not the fastest Web browser on Windows, despite what SVP Phil Schiller told attendees today.

The last public build of the Safari 4 beta revealed a curious slowdown in Windows 7 RC versus Windows Vista SP2 -- about 22% less rendering and JavaScript processing speed overall in Win7. That problem has apparently been rectified in the final release, with Safari 4 build 530.17, released this afternoon by Apple, scoring 21% better than the final beta build 528.17 in Win7.

But in an amazing change of fortune for Apple, Safari 4 on Vista SP2 slowed down dramatically by 20%, meeting the Win7 figures halfway. In Betanews tests this afternoon, Safari 4 posted a performance index score of 12.11 in Vista SP2, tucking the new browser back in third position behind the stable release of Google Chrome 2.0.177.1 at 12.23, and 12.24 for the beta release of Chrome 3.0.182.2. 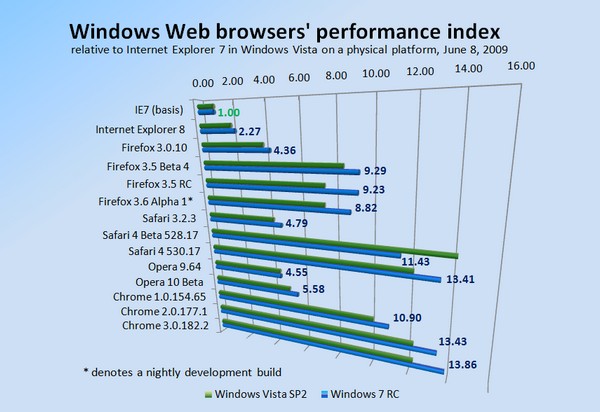 am still wondering ....are these calculations effect the end user in anyways....people use IE , they will still use it....as is the case with firefox, opera, safari, chrome.

being faster , sometimes don't mean anything to users.once they have found a personal preference. its too difficult to pull out users this way.

i was a ff user for last 4 yrs, but now im better with chrome, mainly due to high work space.
E

These artificial tests are just that - artificial. They ignore the fact that js rendering isnt all there is to browser speed. Websites contain a fair amount of html/xhtml and css. Opera is probably the fastest in rendering html/xhtml. And thats the reason why Opera feels snappier than Fx on most pages. But its js engine is showing signs of age. Anyway, the new engine should be here in a year or so.

Opera and Safari may be great, but the end user is finally stuck up with Internet Explorer. If anyone wants to change, they jump to Firefox. Even chrome is not much, unlike people say. It got most of the market share out of tech-circles jus because of the word "Google" prepended to it