A few days ago, my beloved BT headset was taken away from me. It was, iirc a Nokia BH-609 (?) and worked well and still does but it's no longer with me and I need a replacement.

Criteria:
1. Good reception (sound quality for receiver and me)
2. Should preferably have a long full microphone.
rest of the grouches I can live with

Since the BT never belonged to me, I was prepared for such a day (emotionally)
The choices I had in mind: mind you they do not mix well but still are what I desire, despite their comparisons being unfair.

However this might need mention since I love the concept. I have always wanted something that would give me stereo sound without having to go for a full headset. Doesn't matter even if the sound is actually mono but streamed to both ears. It looks like this- 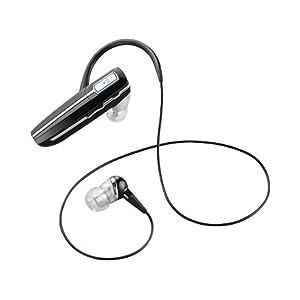 
First up, overpriced beauties, I had intended would replace my trusty old Nokia BT

3.Exact same Nokia BT that I used was the second choice; then these:
4.Plantronics-headset-m1100
5.Amazon.com: Plantronics Voyager 855 Bluetooth Headset (Black): Cell Phones & Accessories - (an option I never saw in retail)​
My first choice of a mono BT headset, it's this. Reason I don't have it is 'coz it's US exclusive and I need to wait for someone to drop by.

Coming to stereo headsets which I have enlisted were/are:


1.Logitech wireless headset -3k - I wanted to get these for long but they are not exactly portable and since I have a SS V1 and Sony wireless headset already, I am not sure if this will make a good addition.
2.Plantronics-headset-backbeat-903+ - this is among my strongest choices but complains about a weak microphone dashed my hopes (and is the reason for this thread actually)
3.Nokia BH 505 - these are good but I want something flexible
​
Some exotic choices:

I initially considered buying two headsets but that seems a waste of money. Not sure what to do now.

hai your blue tooth head set in under warranty period they replace it but, if it is not then you have to buy new one only with added features than before but in same brand you can try ok!
go for it !

Staff member
When I was searching BT headset for my phone, I was lured by mw600 (IDK why you rejected), but the price kept me off. One thing I learnt, good BT headsets come at a price, so I dumped them and went for a wired one.

Why did you reject the MW600? Any specific reason? Read many good reviews about it and I'm planning to buy it(the black one) next month.
OP

I want something like a proper BT headset, just to talk. Initially I though of getting the MW600 and connecting my IEMs to it. But I don't think it is any different from the normal headset in it's function. Also while driving it will be difficult to use. It's a nice device but not suiting my current requirements.

Currently really want this one: tritton switchblade; but realistically not possible. How are the el cheapo BT headsets? that sell for around 1k? Are they any good. Can do with temporary one for now.

No one uses BT headset?
OP

I was about to buy a entry level BT headset but soon realised that I had a taste of a good mid-ranged noise-cancelling headset so I might be very disappointed with a budget one. Hence decided to save up and get a good one, once and for all.

I have come out of the confusion and decided to indulge in a BT headset for the phone (only) now. Here are my final options:

Blueant has me really impressed but I am curious as to whether the others would wow me even further.

I personally feel that Bose products are over rated. No doubt on their sound quality though. I had used the Bose Triport IE Earphones for a while, and I wasn't at all impressed. It was available at 5k then. Not much idea on the BT models though.

//Offtopic: I bought the MW600 two weeks ago from eBay for 2.5k, while flipkart was 2.9k. The signal reception is excellent. I got a full signal and no drop in audio, even at 10 metres. The bundled earphones (HPM-78) are crap though.
Last edited: Mar 26, 2012
You must log in or register to reply here.
Share:
Facebook Twitter Reddit Pinterest Tumblr WhatsApp Email Share Link
Top Bottom