Do you believe in ghosts? Have you seen them

yep i agree with sekhar

Now following are the two incidents which happened in my house.

Near my house lived a barber. He used to go with his cycle to his shop everyday. He did it till he was alive. He died more than a year ago from now. At the night after his fifth day after his death, it was raining very hard. My mother was just watching TV that she heard the sound of a cycle that went past her outside the room which was a type of verandah with a full speed. She checked outside to find nothing. She wondered who could have ridden a cycle with such fast speed during the night.

It happened 16 years back when I was just two years old. My grandfather's mother was very serious on her bed and she was about to die. It is our family tradition that we should feed some water to her before she died. All the member were present in the house except my bigger uncle. He was working in a far off place and took time to arrive. He arrived at 10:30 clock to find her dead in her bed. they took her to the cremation and the night went with cries. The next day at night when everybody were sleeping, my bigger Uncle heard a sound. He wondered what it could be. He found that somebody with the same voice of his grandmother calling him. He lost his sense on seeing his grandmother who loved very much still alive. He followed the sound. She saw her grandmother alive and was smiling at him. His grandmother lured him to ouside the house and took him to the street at a small distance from home. She suddenly disapperared. My Uncle found himself at the midst of the street. He hurried back home and told the incident to everyone at the morning. Everyone was shocked.

Now these are really real incidents my mother told me. If you don't believe it, please don't comment and just ignore it.

^Good to see you laughing 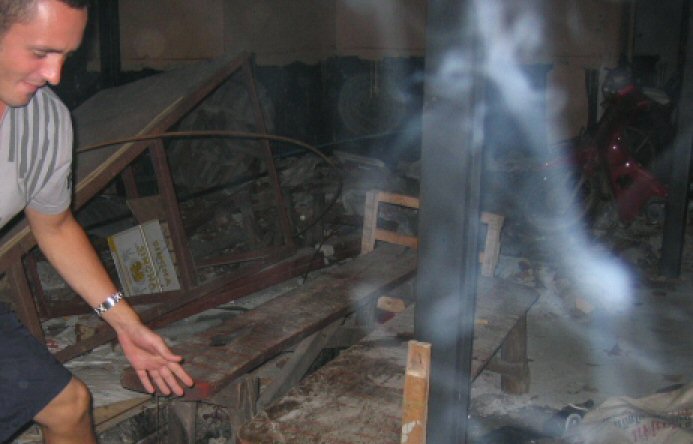 I went to this bhangarh fort which has been officially labelled as a haunted place by Archaeological Society of India (ASI) and it is a criminal offence to be there after 7 P.M.

We were numbering 8 in totality and to tell you guys the truth I was feeling both thrilled and slightly scared cuz of ghosts (if any exist) and what if police catches us it being criminal offence being there at night. We reached around midnight and stayed till morning.

No I don't believe in crap that is god. There's no frigging ghost and certainly no god exists, just a stupid fan club exists that robs ppl of there money and lives spreading hate to kill each other in name god and 72 virgins in heaven.
Last edited: Mar 26, 2009

^^ Yes, I have too read about articles of stories in Bhangarh. I have found that the official signboard is not meant for notifying people about ghosts in the place at night but to keep the people away from the different dangerous animals which come there at night. These are only myths of that place.
Z

Disc_Junkie said:
^^ Yes, I have too read about articles of stories in Bhangarh. I have found that the official signboard is not meant for notifying people about ghosts in the place at night but to keep the people away from the different dangerous animals which come there at night. These are only myths of that place.
Click to expand...

I agree,although there are no dangerous animals in the vicinity.... I think there's a different dimension to it.

The fort has a long history of associated haunting events and sad incidents. So I believe some criminals would have had been using that place at night and that was the actual reason that I was scared thr going at night. So probably ASI to keep ppl away did this. Still is incomprehensible for me to understand why ASI would officially label a place haunted.

If anything such a step would further spread confusion.

lost in my world

tHe rEacTioN iS hEaTinG

Re: Did you believe in ghosts.do you saw them


axxo said:
I have Ghost from symantec installed in my pc
Click to expand...

ghost yes the one which came with nortan CD

Nortan Ghost which version r u talking about

Haven't anybody had any experience with ghosts recently??

The pics u guys r posting has made this thread disgusting.

Haven't anybody had any experience with ghosts recently??
Click to expand...

NO...mainly because there are no such things as ghosts....Its just us humans filling up the unknown with our own imaginations again.
OP

amitash said:
NO...mainly because there are no such things as ghosts....Its just us humans filling up the unknown with our own imaginations again.
Click to expand...

after long time thread is active