Prototype 2 is an upcoming video game set for release on April 24, 2012 in North America and April 27, 2012 in Europe. It is currently under development by Canadian developer Radical Entertainment and is the sequel to 2009's Prototype. Like its original, the game is set to be published by Radical Entertainment's owner, Activision. The game is set to feature a new protagonist, Sergeant James Heller, as he goes on his quest to destroy the Blacklight Virus once and for all. The story is also one of revenge, as Heller wants to kill Mercer after his family was killed in the outbreak of the Blacklight Virus. Set in an open world shown in a third-person view perspective. The game was announced at the 2010 Spike VGA Awards with the tagline "Murder your Maker"

So whats your opinion...

I just played lil bit of the game in a cafe..i liked it.

I liked the previous game but it was kinda repetitive after sometime. I hope this game rectifies that.
Last edited: Feb 17, 2012

In Prototype
The city structure were too cramped
In the beginning the combat skills kept me playing but after while(the water tank destruction level...to be specific) combat turned very repetitive and frustrating so i just gave up.
Although story was quite a thrill to explore...the memory revealing system was useless..shouldnt have been there .

All and all prototype 1 was ok game.


But with Prototype 2 this time it seems they are back with something bigger and wilder.
I mean you hardly get to have a game or movie or books for that reason...which features a new protagonist even when the old one is still there and more importantly when the protagonist from earlier titles turns into villain .(from the beginning itself i knew Alex Mercer will see this day!!!!!..else why would he be running on streets ,slashing mindlessly innocent people.!!!! )

As for now BRAWLERS seems to be the most interesting addition to game although in looks they are very similar to Burnouts of Bulletstorm.
Last edited: Feb 17, 2012

I played first game. I wish Prototype 2 will feature different themes with day night cycle, in first game i feel bored of same look all over the game.

Looking forward to it.
OP 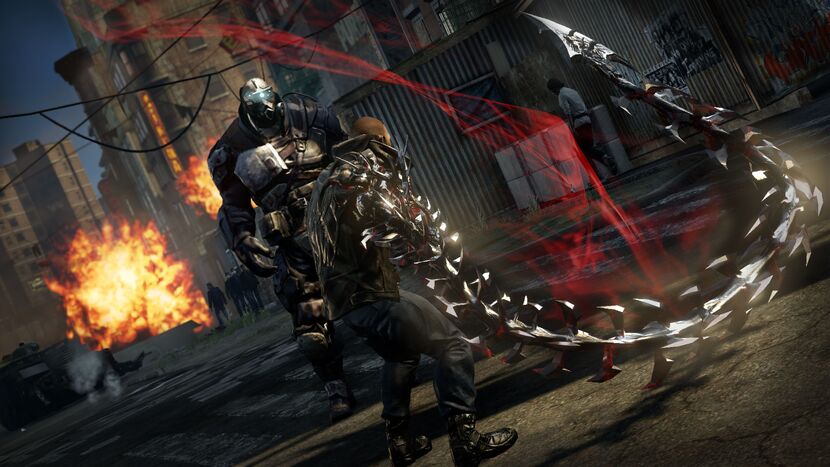 Its kinda remind of the Aliens(Series) Tail

Here, not only do you get that freedom but you get the choice by being intrinsically uber-powerful. In other games, you extrinsically grab something – a weapon or a vehicle – that makes you feel powerful and awesome. In Prototype 2, everything is in you with your various powers – and I think that’s pretty cool.
Last edited: Mar 18, 2012

Looks cool ..Hope it turns out to be good

Wow awesome. I game looks good and its gory.
OP

For anyone who’s ever played the original Prototype, you’ll be pleased to know that the name of the game in the sequel is refinement.Every aspect relating to accessibility and gameplay control has received a massive overhaul.Various pointy appendages can be quickly mapped to face buttons.Locking on to enemies and attacking/avoiding has been simplified.And environment traversal is smooth and sleek.In Prototype 2, after you perform a grab it’s all so clear. Do you want to throw them? Consume them? Tear them apart? Whatever it is you can just do it.The scale is much bigger than the first game so there’s some stuff in there that will really surprise you.It’s the ultimate power fantasy.No other game lets you uppercut a helicopter!Among the new features, is the Pack Leader ability, which lets Heller call down two Brawlers and command them to attack whomever he wants. You can use this as a distraction, too, drawing enemy awareness away from you. Once you’re done with the Brawlers, you can explode them into a gooey mess that detonates across a wide swath of the environment.

The team at developer Radical Entertainment working on Prototype 2 says that they have high hopes for new protagonist Sargent James Heller and are trying to make sure that he never comes off as morally empty as Alex Mercer from the first game in the series.Prototype 2 launched on April 24 in the United States and on April 26 in Europe on the PlayStation 3 and the Xbox 360, with a PC version set to arrive in late July.
Last edited: Feb 18, 2012

So who is protagonist and who is antagonist ??
OP

gameranand said:
So who is protagonist and who is antagonist ??
Click to expand...

James Heller, a soldier who returns home from his tour of duty to find New York City in ruins and his family dead, all because of some hopped-up mutant freak named Alex Mercer

^^yeah i though same

but i think main antagonist should be someone other than these two.

In simple words nobody. We are going to see that virus took over Alex and then James would also be infected so that makes him antagonist too and blackwatch soldiers are already antagonists so this makes the story kinda void. As you discovered secrets of Alex in first game and now you gonna do the same with James. Whats the difference and where does the story leads. Simply nowhere.
OP

Latest Prototype 2 Review and a must read!!

As per preview no major changes at all. It looks so happy