nine-year-old tribal girl in eastern India has married a stray dog as part of a ritual to ward off an "evil spell" on her, Indian newspapers have reported. 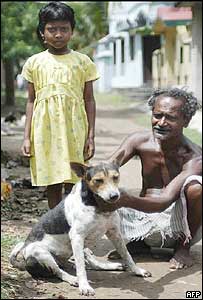 The girl promised to "take care of the dog"

The girl, Karnamoni Handsa, had to be married quickly because she had a tooth rooted to her upper gum, which is considered a bad omen by her Santhal tribe in the remote village of Khanyhan, about 60 kilometres (37 miles) from Calcutta.

"Members of the village jury asked us to get her married to a dog or to face the bad omen," the girl's father was quoted as saying by the AFP news agency.

The tribe elders said the marriage would not affect the girl's life, and that she would be free to marry again later and did not need to divorce the dog.

"It will not spoil her future. We will marry her off to eligible bachelor when she grows up," the girl's mother told AFP.

The wedding - which took place on 11 June - was attended by more than 100 guests, who danced to the beating of drums and drank home-made liquor.

"I have no regret in marrying the dog Bacchan. I am fond of the dog who moves around our locality," the girl told the AFP.

"Bacchan is a stray dog who survives on left-overs. I will take care of the dog," she added.

Indian newspapers reported that local police officials had ordered an inquiry into the incident.

The Santhals - most of whom are sharecroppers - are a large tribe living in the states of West Bengal and neighbouring Bihar and Jharkhand.

Code:
disgusting,DUE TO LACK OF EDUCATION

Code:
My God what must they have thought when they uploaded it.

Crappy people and their rituals
K

Other than that, there are more shocking customs about in the uneducated parts of all countries.

Well I read it last year in The Week. Its really disgusting..

Staff member
Admin
I've got mixed feelings towards this news:

This is very bad man.
I mean wat was they thinking??
It puts Indian to shame.

is the main reason.

Captain Crime where are u getting those cool emoticons??? Plz share the source..
K

i think its from http://smileys.smileycentral.com/ .. from the imge location


sujithtom said:
Captain Crime where are u getting those cool emoticons??? Plz share the source..
Click to expand...

Abhi se hi shadi ho gayi!!!
pity on him.
She not try to take advantage of kutta........like saying him to do household work like
Bartan dhona........Kapre Dhona etc.

This is INSANE man .. feeling disgusted.

Well was there any actions against it???
M

n thy say india is progressing

You cant blame India or Govt for that.
Its just blind faith.
I

Hmmm u got a point Captain Crime but its the goverment's duty to remove such blind faiths and according to The Week it was a swami like person (not sure wat position) who said tht this must be done. Well he should be jailed.....

poor doggy...he had no say in the matter did he !?