WWE 2K15 ushers in a new era of WWE video games! WWE 2K15 brings the hardest hitting and most fluid WWE gameplay to date, closer than ever to what fans see on WWE TV. With significant gameplay enhancements, a presentation overhaul, and all-new MyCAREER and 2K Showcase game modes, WWE 2K15 delivers the most authentic and action-packed WWE video game experience to date.

Feel every blow, hear every impact. WWE 2K15. Feel It. 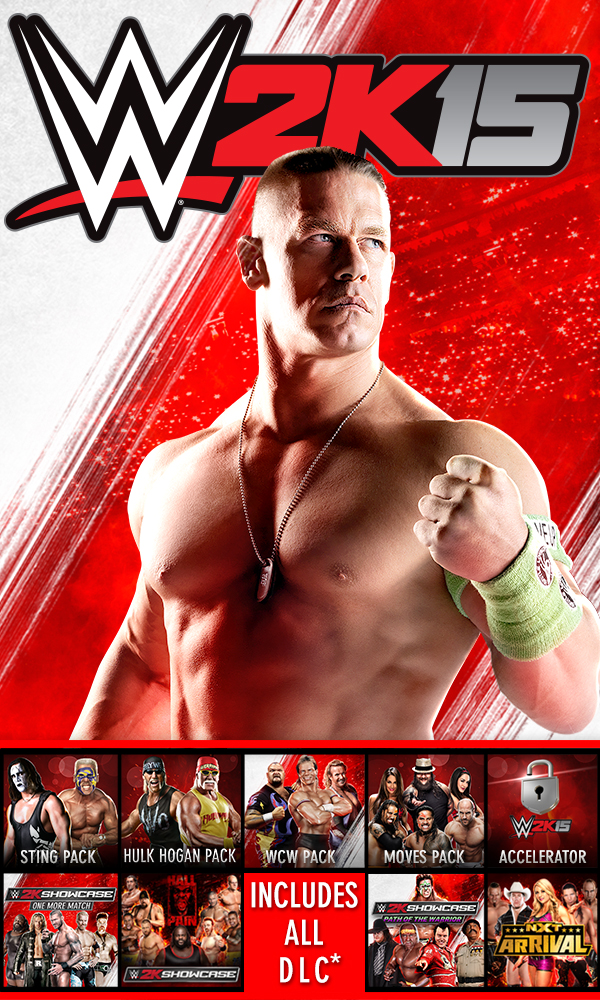 Immediate access to Playable Hulk Hogan and Hollywood Hogan:
What’cha gonna do when TWO versions of Hulk Hogan run wild on you? Receive ”Hollywood” Hulk Hogan, as well as the classic red and yellow Hulk Hogan.

Immediate access to Sting Playable Characters Pack:
For the first time EVER in a WWE ring, It’s showtime! Receive two versions of the legend Sting! Play as blonde-haired retro Sting clad in neon colors, or as the intimidating silent warrior that battled the nWo!

NXT Arrival Character Pack*:
Play as some of the brightest Superstars to ever step foot in an NXT ring with the all new NXT ArRIVAL pack! The future starts now with playable NXT characters such as Adam Rose, Konnor and Viktor of The Ascension, NXT Diva Emma and Former WWE Champion and Monday Night Raw Announcer JBL!

New Moves Pack*:
Gain access to over 30 new moves to add to your arsenal with the WWE 2K15 New Moves Pack add-on! Perform exciting new moves like Uso Crazy and the Spinning Powerbomb, as well as variations of Bray Wyatt’s Sister Abigail and Cesaro’s Gutwrench Suplex.

Showcase – One More Match*:
Relive the heated Randy Orton and Christian rivalry with hours of new 2K Showcase action in One More Match! Battle through epic matches as their story is told through your gameplay and historical WWE footage. Also get playable WWE Superstars from 2011: Christian, Randy Orton, Edge, Mark Henry and Sheamus and 2011 arenas: SmackDown, Extreme Rules, Over the Limit and Capitol Punishment.

nice . I'v played only ps2 versions of this series.

In which month will they release it ?

Doesn't look too good when compared to others.

I came here with the thought that, WWE2K15 is a real wrestling event.

Btw, here are the PC requirements:

after so many years, finally they realized there's something called PC, can be used for gaming as well.

ratul said:
after so many years, finally they realized there's something called PC, can be used for gaming as well.

They must have saw that MK9, MK10, Injustice, Street Fighter, Naruto etc sold quite well on PC as well so trying their luck with PC as well.
OP

Can someone tell me how many female fighters will be there in this game ??

glad to know a pc port is coming

I don't watch WWE anymore but it'll be fun to play with a friend (or foe).

gameranand said:
Can someone tell me how many female fighters will be there in this game ??
Click to expand...

Lol fighters. They called divas in wwe and yeah they will be available there likes of AJ lee, Bellas twins, Naomi etc.

kapilove77 said:
Lol fighters. They called divas in wwe and yeah they will be available there likes of AJ lee, Bellas twins, Naomi etc.
Click to expand...

I wanna know the exact numbers and names. This might decide if I would buy the game or not.