Essense Transmedia Pvt Ltd. and Neon Gaming have come together to bring you the Indian eSports Championship. Cafe Warz is a 48-day long city-based competition is designed for amateurs and professionals gamers along with the Gaming Cafe owners comprising of 64 teams in the playoff league. In its second phase, a national level online gaming competition will be hosted where the shortlisted 16 teams battle it out in the mega finals – the Ground Zero, scheduled to be held in Mumbai. The winning team will be rewarded a cash prize of Rs. 3 lacs. 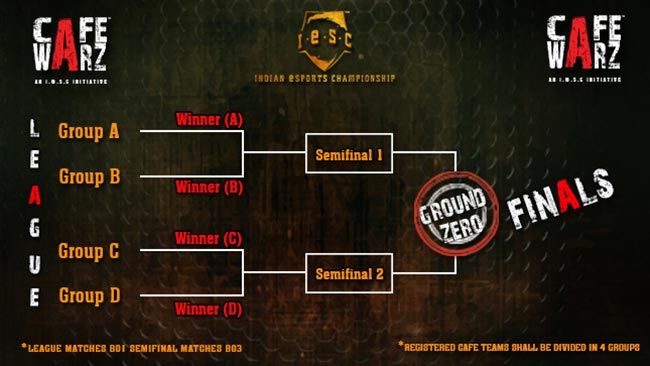 You can read the full press release below:


Indian eSports Championship, a brainchild of Essence Transmedia Pvt Ltd. And Neon Gaming Studio is set to break the cultural stereotype attached to the gaming industry in India.

While the championship has provided opportunities to amateurs and professionals gamers, it is also empowering casters by providing them an opportunity to practice their skills and driving niche jobs in esports gaming.

“With this initiative, we aim to create an enriching platform for the aspiring & talented gamers in India. We also plan to communicate to parents of players in esports on the scope of professional gaming and help them understand the range of cyber wellness issues that the youths face today.” said Ashish Jain, Chief Development Officer of Essence Transmedia

Harsh Kothari, CEO and Founder of Neon Gaming Studio said ‘We are overwhelmed with the response received from the gaming industry. Gamers from across the country have converged onto this platform to display their skills and it has been an action-packed game so far”

Throughout the month of October, Indian eSport Championship is hosting a ground-breaking league playoff comprising of 64 teams. The 30 days long playoff is uniquely designed to shortlist 16 teams for the mega finale, Ground Zero which will be held in Mumbai. The electrifying event is set to be packed with tons of gaming action and entertainment.

The winning team will be rewarded a staggering cash prize of INR 3 lacs.

Staff member
Admin
Or more importantly, what games are going to be played?

That poster is just some generic ad blurb.

Desmond David said:
Or more importantly, what games are going to be played?

That poster is just some generic ad blurb.

Lol,till now I was thinking Ground Zero is one of the CS version so that will be main game and some other games will be there too
N

And more importantly how to participate!