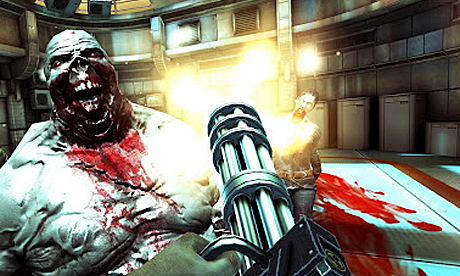 With 400m activated devices and another 1m added every day, Android is on a roll. So why are many games developers still wary of porting their iOS titles to Google's platform? Piracy is a key reason.

Developer Madfinger Games is the latest company to fuel the debate, after changing its Dead Trigger game from paid to free on the Google Play Store. The zombie-themed first-person shooter launched earlier in July for $0.99.

"Regarding price drop. HERE is our statement. The main reason: piracy rate on Android devices, that was unbelievably high," the company posted on its official Dead Trigger Facebook page, comparing the game to its previous title Shadowgun.

"At first we intend to make this game available for as many people as possible - that's why it was for as little as buck. - It was much less than 8$ for SHADOWGUN but on the other hand we didn't dare to provide it for free, since we hadn't got XP with free-to-play format so far. - However, even for one buck, the piracy rate is soooo giant, that we finally decided to provide DEAD TRIGGER for free."

The company's post was likely in response to criticism from players who had paid $0.99 for Dead Trigger in its first few weeks on the Google Play Store. Pocket Gamer reports that a number had posted one-star reviews after the change, angry at having paid for a game that is now free.

Hope it is not thier last game for android.

^yes we can with jelly bean.

In JellyBean, applications will be encrypted with a device-specific key so they can't simply be copied and uploaded to the Internet. This means more legitimate sales for developers.
Click to expand...

^that jelly bean encryption will also be hacked...

iOS is more affected than Android from piracy

exactly i read it in some comments too

The best way to beat piracy in the digital world is to do what Microsoft does. Piracy or not make sure your products are well known and widely used. The relatively smaller paid user percentage out of a bigger slice will offset the loss by piracy.
Also proper pricing is important. An 8$ price for a mobile game in India will indeed be considered high.
Access is another factor. Very few people here in India own a credit card. Compare that to the n number of people who own an Android device today. So they have less access to paid content. Nokia is doing the correct thing. They are stitching up deals for Nokia Store with cellular operators so that one can buy direct using the phone bill or prepaid account balance. Eg. me
Lack of a refund policy. For a free game, one can try as many as one likes and keep only those whom we like. Not possible with a paid game.

Staff member
My views are somewhat different. Don't know about other Countries, but in India, it'll take another decade to reduce piracy.

Even if you give the product at lower price, you still won't be able to change an Indian mind which will think "Why should I pay for that if I can download it for free..?? I'm already paying for my net connection".

Actually 90% of people still thinks "I invested in getting the Device / PC and you want me to pay for the Software too..??"

One cannot change the culture overnight. And people need to be exposed while growing up to the idea that one has to pay for digital goods. And for that to happen they need to have avenues of buying things.

It would really be interesting to see the opinion of Symbian developers in India in this context.
R

* Typical Android owner:
- Cheap
- Never buys an App or
media
- Their only enjoyment is
overclock the hardware or putting some cool
animated screensaver
- The whole Android game
is to see who's firmware
and juiced OS build runs
faster than each other Where's the ecosystem
here?
N

Piracy is one of the vital reasons Android became so famous. Easy access to apps for those who don't spend a penny but want to enjoy all the luxuries. Slowly developers will leave android, the same thing happening to Windows right now.

This is really sad. Almost every app is available pirated.

And we've ad-blockers too in Android.
How are developers supposed to earn?

Dead Trigger goes free on iOS, where piracy is apparently also a problem | The Verge

this proves developers have a problem not piracy

Staff member
I don't have a single pirated app in my phone and will never have .. if I cant afford a $0.99 app then I should not be carrying a smartphone in the first place. I still dont know the mentality of people here in India, they subscribe to stupid services for 30 bucks, download "HOT" photos for 5-10 bucks via their GSM provider but still cannot buy a worthwhile app they would use for a longer time period.

RCuber said:
I still dont know the mentality of people here in India, they subscribe to stupid services for 30 bucks, download "HOT" photos for 5-10 bucks via their GSM provider but still cannot buy a worthwhile app they would use for a longer time period.
Click to expand...

RCuber said:
I don't have a single pirated app in my phone and will never have .. if I cant afford a $0.99 app then I should not be carrying a smartphone in the first place. I still dont know the mentality of people here in India, they subscribe to stupid services for 30 bucks, download "HOT" photos for 5-10 bucks via their GSM provider but still cannot buy a worthwhile app they would use for a longer time period.
Click to expand...

I recently bought Jkay mod Deluxe setting app which is worth for me but what about stupid apps with high prices.

I recently bought Jkay mod Deluxe setting app which is worth for me but what about stupid apps with high prices.

only dedicated SPB users or someone very new to Smartphones will use that .. I used to use SPB products on windows mobile 6.1 days, it was something new and exciting.. now I prefer simpler interface (Launcher Pro Plus user here ).

people should not buy high priced apps which do not provide a demo version, they should check the reviews and also see if the app satisfies their needs.. also there is refund option so if one doesnt like the app they can get a refund(I think after some deduction).
You must log in or register to reply here.
Share:
Facebook Twitter Reddit Pinterest Tumblr WhatsApp Email Share Link
Top Bottom