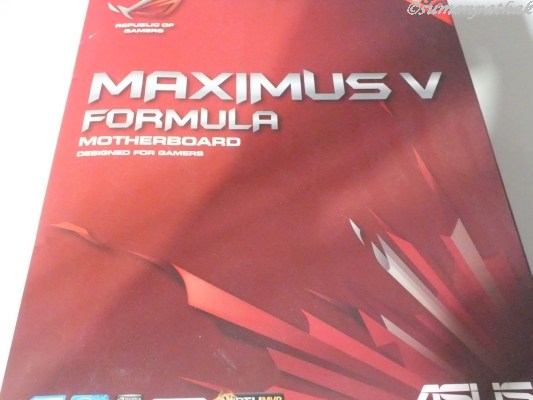 Now..before we dive into the product showcase and review lets have a look into the history of ROG line of Hardware and this board in particular Rog was established way back in 2006 with the Crosshair(yes its an AMD board and back in the FX-64 days AMD literally thrashed Intel until the 45nm C2D and C2Q came out),soon they launched another Board Commando and soon other boards followed.

Here’s a short history for the guys who are interested:


In short ROG offers the best from the stable of Asus in terms of performance and they are rarely matched. 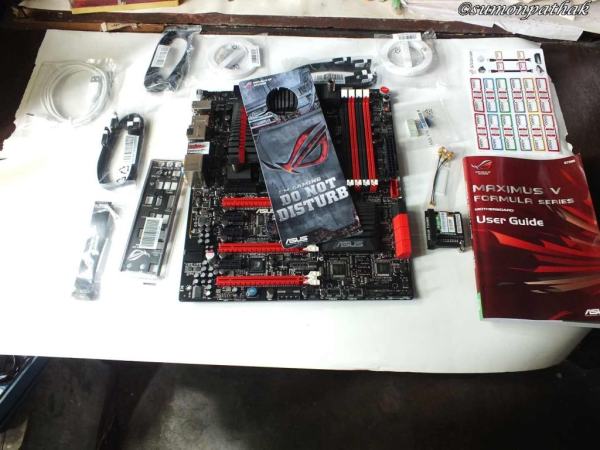 ​
This particular SKU comes without the ThunderFx module so everything except that is present.
The bundle includes: 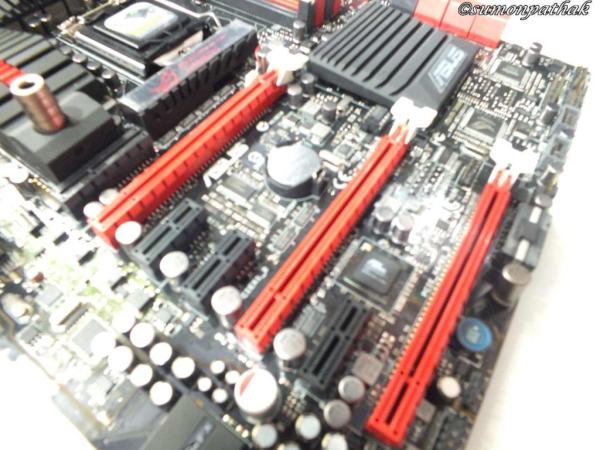 Typical ROG style board with black and red layout;the thing that strikes out most is the ceramic heatsinks on the VRM and PCH area and the Fusion Thermo heat-sinks.
​ 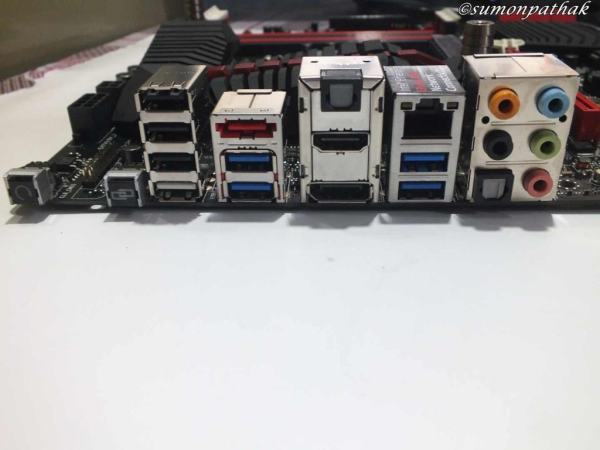 The External I/O port is packed with stuff(expected with high end board)
​
Lets see what they have:​ 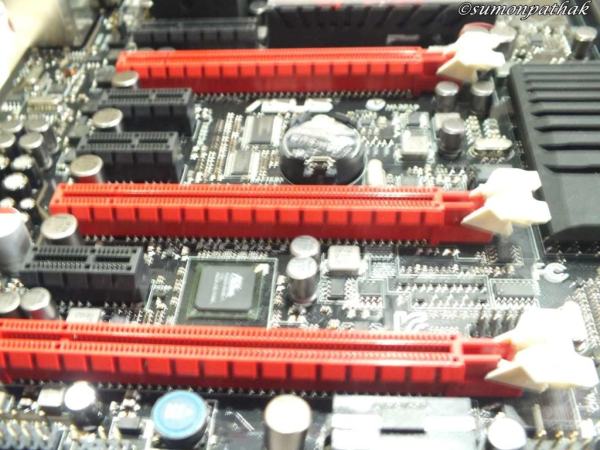 Expansion slots are plenty for a board at this price range: 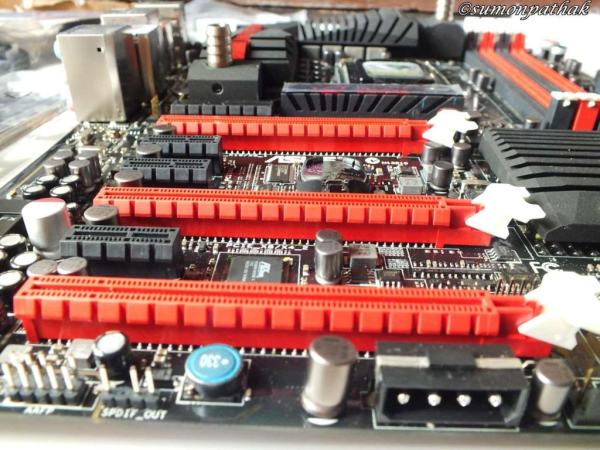 looks good from this angle...isn't it?

This is one of the most innovative thing I have came across in the recent times. Basically its a Aluminum VRM Heat sink with channel for water cooling inside;so you can use it for passive air cooling or if you are one of those DIY water guys then you can actively water-cool it. It is compatible with all the major DIY water cooling sets so compatibility is not a problem,just add an extra loop and you are good to go. 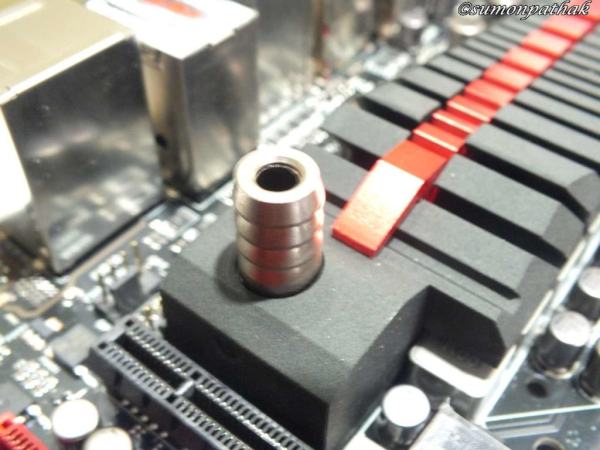 An update to the existing DIGI + VRM’s found in the Asus motherboards.The Digi + II engine provides more control the voltages and allows you to do minute tweaking.A few screenshot would help you understand what kind of adjustments you can do: 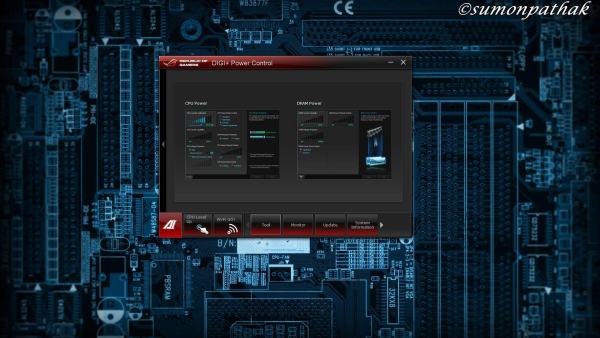 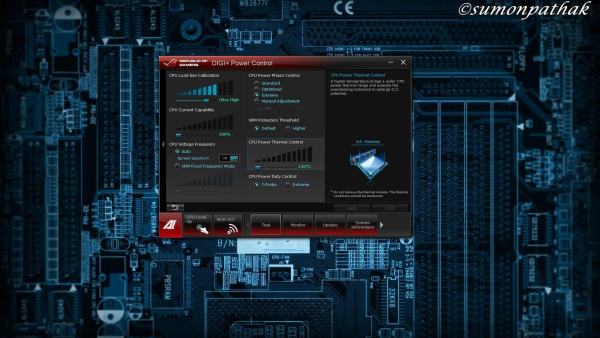 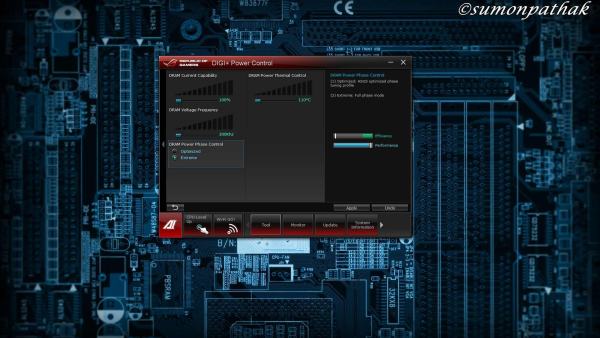 ​
SupremeFX IV
An upgrade over the Supreme FX III solution..am not an audiophile per se but i can give you an idea about the features:


So all in all I can say a pretty good package. 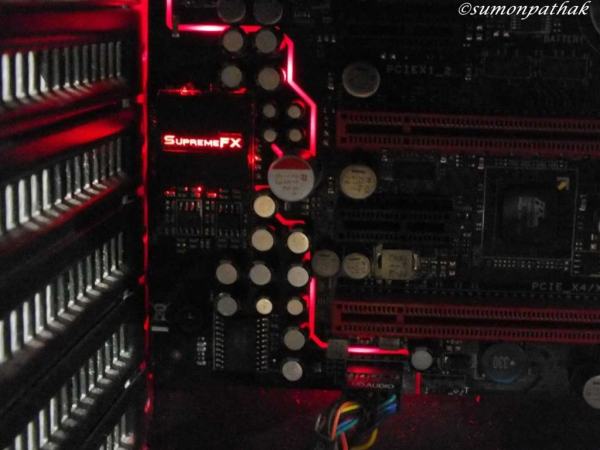 ​
Turbo V Evo
Not much to say..pretty much everything you need to OC the living daylight out of your processor. My advice: Overclock from the BIOS itself and use this tool for small adjustment to squeeze out the last MHz form your chip. And if you are one of those fire and forget types just click on “Cpu level Up” and select a frequency and let the board do the rest. 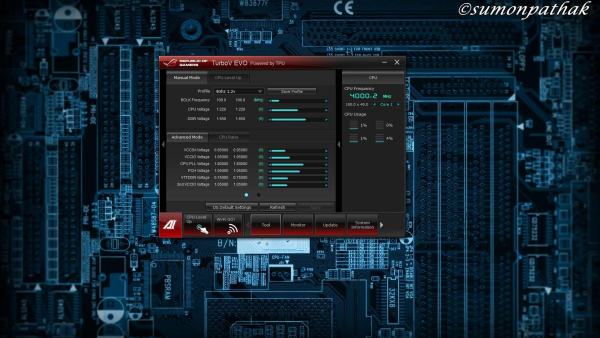 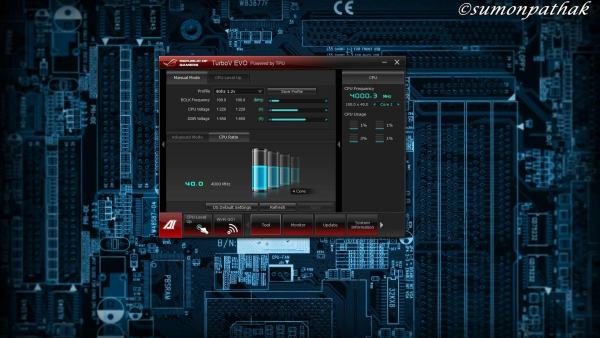 Overclocking
Overclocking on this board is easy if you know what you are doing,there are around a few hundreds setting there and all help you in getting a good benchmark score. As for overclocking your processor the automatic one clock solution gave me an option of overclocking up to 4.83Ghz(46X105MHz) But that ain’t enough for me… so i took matters into my own hand settled for 4.94Ghz(48x103Mhz)!

​
By this time I was kinda getting high with speed so I pushed some more for a suicide run(don’t try this at home and if you try don’t blame me if you blow up);and settled for : 5.2Ghz(100.1*52)! I was pleasantly surprised to see that in Z77 platform i got two extra multipliers.

​
Now the benchmarks..not much to say..let the charts do the talking


Every benchmark was run until the results were consistent to rule out margin of errors as much as possible.
A few points when analyzing the graphs:
*AIDA 64 Benchmarking suites:Higher score is better
*SuperPi and Wprime:Lower score is better
*3D Mark Vantage CPU and Cinebench and X26 Benchmark:Higher is better
So now that’s over lets see what the board gives us.
First up the 2D benchmarks

The results from P8Z77 V Deluxe are a bit low when run on initial bios but they have been fixed on the later bios updates.And Maximus V Formula’s perfromance is consistent through out the phases.

Frankly, the formula amazed me a bit there… we see an almost 60% jump in stock FPU scores in some benches.So i guess someone can explain what sorcery is this.

​
Competitive benchmarking is where the Formula Excels and we can see the formula leads the way ahead of the other two boards.

Here also we see the Formula keeping its lead.
​
3DMark Vantage is both CPU and GPU dependent(more than the other 3Dmark Benchmarks),lets see how the Formula fairs in this bench.

​
Am a bit shocked at the scores when comparing with Z68.But i guess its more due to the platform than the board. I will test out with ivybridge when I can get my hands on a sample.


Next up some real world workload tests: 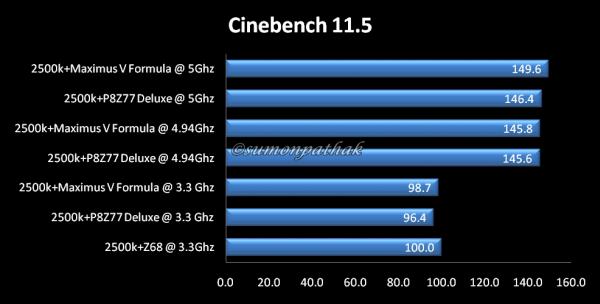 Now that concludes the Benchmarking part. Maximus V formula leads all the way as expected.

When a product has the ROG logo it is expected to perform better than the competition and the Formula has delivered! it kept its lead in all the tests and performed well till the end..so from my side its a win. From the features department it got something for everyone:


what more a person can need?


Overall an excellent package and since there is virtually NO competition as of now in this segment in INDIA no one can challenge its position. Anyone getting into serious competitive benchmarking and gaming should have it in their list.
So from me and Team OCFreaks I give it an 5/5 rating.
A little something from world famous overclocker Allen Golibersuch aka “Splave”

Every generation one looks for a motherboard that is feature rich but most importantly one that they know will take their CPU’s and Memory to the maximum of their potential. The z77 ASUS ROG line delivers once again and in each pricing segment with the gene, formula, and extreme.


In the end i want to thank a few people for making this review possible:


Until next time…signing out…
sumon pathak
Last edited: Sep 8, 2012

Simply Faqin Awesome...it takes some months to save that amount for MoBo n u enjoy it free (dafaq review units)
OP

LOL...am waiting for some comments like "simply overpriced"...abc..is better...xyz kicks ass kinda comment
as for review units..well....u can say its my reward after toiling for 3 yrs....

Overkill. Only for lN2 freaks I'd say.
Formula and extreme are too overpowered lol

sharang.d said:
Overkill. Only for lN2 freaks I'd say.
Formula and extreme are too overpowered lol
Click to expand...

try to get your hands on one
this should be a must for any serious overclocker...

Good review.
AND Yes, it IS overpriced in USA. Any idea about Indian pricing?
OP

Well,it is an excellent motherboard and as far as I think it can not be called overpriced because the people who will shell out the money for this will know what they are getting in return. I have to say the review is super awesome. Every detail covered and very well written.