I think i haven't seen a tennis channel here in this forum yet..( IF there is one, feel free to close this one mods. )

For more, info on ATP ( : Association of Tennis Professionals - Wikipedia, the free encyclopedia )

The Grandslams comes under ITF tournaments. The grandslams are alson known as Majors. These are the most Important & most popular tennis tournaments during the year. There are 4 Grandslams held :

Rafa is ranked at No.1 presently, Novak at no.2, Murray is at No.4 while Federer is at No.6.
These 4 Players are collectively known as the Big 4 as these 4 players have usually dominated the top 4 rankings for many years.

Roger Federer is widely Considered the Greatest player ever to play the game. Often referred as GOAT ( Greatest Of All Time ), Federer was almost Unbeatable in his Prime years ( 2004-2008 ). His records at grandslams is impressive. Currently, he is said to be in a bit of a slump.
His arch nemesis, Rafael Nadal, is one of the best players in the open era & could soon catch up with roger's records, provided he maintains his fitness.

Enough about basics, lets get down to business..

Australian open is into its 2nd week & it just got better..
The QFs were as follows :
Ferrer vs Berdych ( Berdych wins in 4 sets )
Novak vs Stanislas Wawrinka ( Stan won in an Epic 5 setter )
Federer vs Murray
Nadal vs Dimitrov

Today's QF between Novak & Wawrinka was an Epic. They had an similar Epic 5 setter match at australian open & us open last year.

A 28-match winning streak and a three-year reign as Australian Open champion ended tonight, and so did a string of heartbreaking defeats for Stanislas Wawrinka. The eighth-seeded Swiss, who lost two five-setters to Novak Djokovic in 2013—including a 12-10 fifth set in Melbourne—finally solved the superb Serb, winning 2-6, 6-4, 6-2, 3-6, 9-7.

The only elements of their latest classic that shouldn’t be immortalized are the two points you’re most likely to remember: Djokovic’s painfully costly errors at 30-30 and 30-40 of the final game. Serving to stay in the match for the fourth time, Djokovic was pushed to 30-all and then pushed a sliding volley wide after Wawrinka fought off a strong body serve. The shock of both Wawrinka’s return and Djokovic’s reply was exceeded only by the final mishap, a botched serve-and-volley attempt that sent the defeated champ racing to the locker room.

But for all that Djokovic gave away in that final, unexpected minute, Wawrinka earned himself over the previous four hours. He won the second and third sets after a clinical start by Djokovic, who looked to turn this marathon into a short sprint. But Stan’s subsequent stands made that an impossibility. It also made Djokovic play his best tennis in the fourth set, a set so often noted for high quality in these kinds of extended matches.

Unable to break Wawrinka—or even get a break point—in a four-deuce sixth game, the world No. 2, contending with a somewhat errant backhand, went on to break from 40-0 to reach 5-3. Wawrinka still wouldn’t concede the set without a fight, earning two break points with Djokovic attempting to serve it out. But with roars and serves of fury, Djokovic forced a deciding fifth, the only place he would seemingly surrender his title.

This fifth set may not have been as lengthy as last year’s; the shotmaking may not have been as high quality. And it certainly wasn’t as fluid—play was stopped for five minutes because of a random rain shower. But none of that mattered to anyone invested in this gripping contest. The drama began when Djokovic broke Wawrinka for 2-1—he celebrated like he’d won the match—and then immediately gave it back with a four-error game. It would be the last poor game he’d play until the last game of the match, for Djokovic continuously tested Wawrinka while returning and was efficient on serve. Wawrinka saved break points in the fifth and seventh games; after that, a holding pattern emerged. It came down to who would blink first. Or, as it turned out, twice.

Wawrinka’s win puts him one match away from his first Grand Slam final; Tomas Berdych is his semifinal obstacle. As for Djokovic, he’s now gone one full year without winning a major title. A French Open crown, which would give him the career Slam, is probably the only salve he can think of that would heal his wounds.
Click to expand...

If any members can contribute to this thread regularly with any tennis- related news, it would be awesome.

do you also follow tennis regularly ?? who's your fav. player ??
& what are your thoughts on tomorow's QF ??

Well, I don't get a chance to see it live (busy schedule) but I do follow it (along with chess, poker) . I am a big Rafa fan but have immense respect for Federer. Nadal's going to win tomorrow but can't say about Federer vs Murray match as Federer's perfo in big matches is dwindling lately.
OP

Nadal defeated Dimitrov in a good 4 setter match, while Federer continued with his fine form. Although, he faltered a bit towards the end of the 3rd set, he was playing very well.

The mens semis are set as follows :
Wawrinka vs Berdych ( Thursday )
Federer vs Nadal ( Friday )

Federer will resume his long rivalry with his rival, Nadal, on Friday when the two will fight it off for a place in finals.
If federer wins the semis & then the finals, Federer will jump from his No.6 position to No.3 Position.
If he loses the semis, he's probably gonna drop to No.8.

Wawrinka has a good chance against berdych & can beat him..
Federer will continue with his abysmal H2H with Nadal & will be defeated by nadal in 4 sets. ( i hope fed wins though ).

In the Women's draw, Li na will face Cibulkova in the finals on saturday..Both of them had a easy semifinal match..

Can't wait for tomorow's blockbuster semifinal match between rafa & roger !!!
Hopefully, we can have a sweet swiss finals !!

getting a bit difficult to predict the winner tomorow..

Roger :
Strength : renewed energy & style of play, has been in tremendous form this week.
Weakness : stamina (age), mental barrier against rafa..those high topspin ( moonballing, i'd say ) shots to his Backhand has always been brutal.

Fingers crossed for a federer win.

Nadal :
Strength : good form, incredible willpower & stamina..in short, he's rafa. ( nuff said ).
Weakness : Rafa has some bad blisters on his left palm which is causing him trouble while serving..it might also cause some trouble with his Forehand.. Yet another crushing defeat for roger at the hands of Nadal...apart from the first set, Fed's level of tennis was pretty much average..had no chance against the awesome power of nadal.. 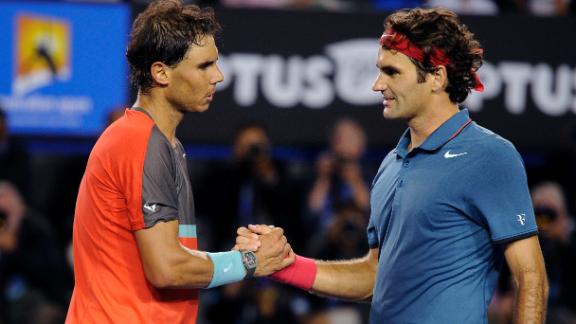 THE big mens Singles finals between stanislas Wawrinka & rafa Nadal is scheduled tomorow .It will start at 2 PM ( IST ).

Come'on it hurts when he gets beaten like this

PS: Don't you guys feel he has become too thin as compared to his golden days

He is a bit Thinner when compared to his golden days( not really noticeable though )..but he's been like this for the past 3-4 years..Most say its because he got mono in 2008... :O

Bryan bros were defeated in the third round..They were defending champions at aus open and easily the most successful team in men’s tennis..
shocking straight sets defeat at the hands of unseeded players : Eric Butorac and Raven Klaasen : 7-6 (9), 6-4..
i think the match didn't even last 90 mins..

It will be a 5 setter match for sure..
OP

@sksundaram : I sure hope so..a thrilling 5 setter win for stanislas..
but, i think nadal won't let him play for 5 sets.. he's too good from the baseline..unless, he's having a bad day or stan's having a extraordinarily good day, i don't see this going beyond 4 sets ( rafa winning, ofcourse )

Edit:- I got it so Stanislas Wawrinka wins maiden Grand slam of his career

I can't believe it. To go down like 3-6 twice in a final is unbelievable . What happened to him?
OP

@sksundaram - it looks like he strained his back when he was training before the finals.. he was feeling a bit sore earlier, but by the end of 1st set, the back started paining a lot more. Its really unlucky that he encountered this during a final.. I don't know how stan feels atm, but If i was stan, i don't think this victory would be justified..Fanboys have already started saying that stan couldn't have won this match if rafa wasn't injured..

but, overall, i felt that stan deserved the cup !! he played extremely well in this tournament !!!
Full credit to Rafa Nadal for finishing the match. For not handing the trophy away.

But honestly Stan was the better man today. In the 1st set where Rafa was playing normally, Stan did win fair & square. But it was disappointing that his injury kicked in at the wrong time. Would've loved to see a great battle.
You must log in or register to reply here.
Share:
Facebook Twitter Reddit Pinterest Tumblr WhatsApp Email Share Link
Top Bottom