Mumbai suspect is 'not a minor' 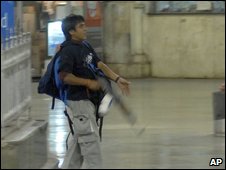 The leading suspect in last November's deadly attacks in the Indian city of Mumbai (Bombay) is not under 18, the court trying him has been told.
A team of four doctors who examined Mohammad Ajmal Amir Qasab told the court that he was over 20 years of age.

The court ordered bone and dental tests on Mr Qasab after his lawyers said he should face trial in a juvenile court.

Over 170 people, including nine gunmen, were killed in the attacks. Mr Qasab is charged with waging war on India.

He faces the death penalty if convicted.

'More than 20'
"The accused had raised the issue about his age. A team of four expert doctors had examined him on court orders," chief public prosecutor in the trial, Ujjwal Nikam, told reporters in Mumbai.

"They have tabled their report after his dental and bone examination in the court. The doctors unanimously say that he is more than 20 years old," he said.
Besides medical evidence, Mr Nikam said the prosecution also examined two witnesses in court.

"After his arrest in November, Qasab was admitted to hospital where he told the doctor he was a resident of Pakistan and 21 years old.

"Later, when he was taken to the Arthur Road jail, there too he said he was 21," Mr Nikam said.

The order came after Mr Nikam filed an application asking the court to settle the matter of Mr Qasab's age before the trial began.

Mr Qasab's lawyer, Abbas Kazmi, had claimed that his client should be tried in a juvenile court.

Mr Kazmi also retracted a confession his client made in front of a magistrate in February, saying it was extracted through coercion and force.

It will be up to the judge to weigh the evidence at the trial and decide whether the confession should be taken into account.

The prosecution had read out parts of his confession as the trial began and accused him of killing 166 people.

Two Indians, Fahim Ansari and Sabauddin Ahmed, are also on trial, accused of being members of the Lashkar-e-Taiba militant group and of scouting for the attacks.

India has accused Pakistan-based fighters from Lashkar-e-Taiba of carrying out the attacks. Pakistan has admitted they were partly planned on its soil.

Mr Qasab was arrested on the first day of the attacks and has been in custody ever since.

A huge security operation has been launched for the trial involving hundreds of armed police and soldiers.


This asslols case has turned into a joke. Shame on our pusillanimous government !

Minor or major, he should get more threatment than he deserved till now..

and thanks to the bumper 4 bumping

Coool said:
Minor or major, he should get more threatment than he deserved till now..

and thanks to the bumper 4 bumping
Click to expand...

Cant you see he is a spammer.

^ yeah, i know but what to do? I saw a spam thread in chit chat section which is created yesterday around 8pm did'nt get deleted till now

This will go for ages. Blame the legal system. Nothing wrong in US statement that the slow Indian judicial system causes big delay in cases related to terrorism.