Discuss L.A. Noire in this thread 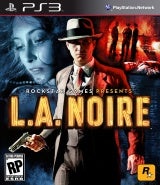 Set amid the violence and corruption of post-World War II Los Angeles, L.A. Noire is a crime thriller that seamlessly blends crime-solving, clue-finding, car chases and shoot-outs with revolutionary new interrogation-based gameplay that will allow players to read characters' emotions in order to reveal the truth. Players will take on the role of Cole Phelps, a decorated war veteran, who rises through the ranks of the LAPD by solving a series of gruesome murders and other crimes that bring him face-to-face with the dark heart of Los Angeles during Hollywood's Golden Age.

I'll just copy-paste my impressions which I posted on TE.

The game is so freakin' amazing that I went on a marathon spree and completed the whole first disc in 5 hours long session. The moment I got it, I thought of playing the game for sometime, make some observations of the gameplay and keep it away. Unfortunately, it wasn't that easy. Why? Read on.

First off, this game is not developed by Rockstar. They are just the publishers. Since their name is plastered all over this game, we usually tend to forget who actually made this game. It's Team Bondi's game. Next off, this ISN'T GTA. Like Chris Tucker puts it in Rush Hour "This is the LAPD. We're the most hated cops in all the free world." Yes, this is all about LAPD, it's politics, it's internal interaction AND about officer (and former War Veteran), Cole Phelps. For people familiar with the movie L.A Confidential, the presentation is done exactly in the same way.

The moment you start the game, you'll feel the need to explore and find clues. My advice, take some time to get adjusted to the game mechanics. It's all about keen observation and having a proper judgment of reading peoples faces, to know if they are telling the truth or straight out bluffing. The game is divided in solving cases. You'll be briefed about your case at the station, you reach the crime scene, investigate the murder, gather clues in your personal notebook, interview possible suspects, gather more clues, link the evidence & eventually apprehend the killer. Simple right? Well almost. Like I said before, you need to have keen observation and judgment of the suspects and witnesses reactions to your questions. This is how it works. When you investigate a murder, the clues you find are taken down in your notebook. A background music plays in a grim tone indicating you have clues to find. Once all the clues are found, the music fades away. Then you question the witnesses about the crime and try to gather details from them. The game implements a system where you ask a related query to the witness/suspect and based on their facial expressions/reactions, you have to check if they are A.) Telling the truth, B.) In doubt OR C.) Lying. This is where the new facial animation feature kicks in brilliantly. Every person would have a different reaction to your questions. Some would not make eye contact, some would come clean, some would break down or be sarcastic etc. You be the judge. If you select lying option, be prepared to back it up with evidence to prove your accusation towards the suspect/witness. If you fail, then you'll miss out on a possible clue, not to mention getting an angry remark.

While investigating, you have a feature called 'Intuition point' to help you make a choice. You gather intuition points by raising your ranks by completing main and side mission. What's an intuition point? It's basically to be spent to get some help during your investigation. For example, when you're in doubt while questioning a witness and don't know which option to choose, spending an intuition point eliminates one of the wrong option out of the three choices (Truth, Doubt & Lie). Kind of like 50-50 life line option which you find in KBC. You can also use it to find all the clues location to be unveiled on the map of a particular crime scene.

Once you have all the clues are in place and you have investigated all the possible witnesses, you can narrow down the suspects and nail him/her down. This can either include gun-fight action or chase sequences. Once you complete the case, it's closed and your rank is boosted based on your stats and performance in the game. Side missions include Street Crimes, gathering news papers (reading it's headline, plays the article in an interactive cut-scene), visiting landmarks of LA, driving & unlocking variety of vehicles. The major chuck of side mission goes to Street Crimes. They are random calls that you get over your dispatch radio (only available if you're driving in a Police vehicle). You can press 'A' to answer the call and the response will be sent. You'll have a 'Yellow running man' marker on your map and that would be your destination. Once you reach that point, a cut-scene will initiate and let you know what's the situation. It could be anything from chasing a lunatic down the street to nailing down a bunch of thugs. If you fail that case, you can have another shot at it by answering the call again. There are 40 of those in the game.

The graphics look stunning on the 360. It's the City of Angels and looks so dam vibrant during day time. It's been given a great deal of authenticity by Team Bondi. The map is huge and I mean HUGE. You can practically spend an entire day traveling the whole place and you'll still have more to explore the next day. Frame rates are really wonky during day time and during action sequences on the 360. Loading times are minimal, if the game is installed to the HDD. Disc swaps need to be done after 8 cases or so. Some of the textures looks sharp, while the surrounding objects and apartments could look dull. No visual tearing was noticed. Physics are freakin' awesome. My hat got blown away during a fire fight. The game sadly does not have dynamic day and night cycle. Music changes depending on the situation, which could be intense symphonic during action to smooth jazz during driving a vehicle.

This game is really addictive. You'll feel the need to just keep playing and not stop until you have completed the case. The first time, I kept waiting for a side mission call on my radio to keep me from completing the main story mission too fast. My stats last showed 27% completion when I ended the first disc. The re-play value of this game would be a bit less, since you most of the mystery behind the case is already uncovered, so there is no element of suspense left. You can just re-visit the cases to undo the wrong choices you had did the first time. This is a title which is very unique and story driven. You'll feel like a real detective while solving the crimes. Team Bondi have definitely proved themselves. That's all for now folks.
OP

Thanks for the great review Ethan! This makes me wanna play the game ASAP

Burning in the skies

This is how one should open a discussion thread.

Set amid the violence and corruption of post-World War II Los Angeles, L.A. Noire is a crime thriller that seamlessly blends crime-solving, clue-finding, car chases and shoot-outs with revolutionary new interrogation-based gameplay that will allow players to read characters' emotions in order to reveal the truth. Players will take on the role of Cole Phelps, a decorated war veteran, who rises through the ranks of the LAPD by solving a series of gruesome murders and other crimes that bring him face-to-face with the dark heart of Los Angeles during Hollywood's Golden Age.

This is a big NO.

Psychosocial said:
It's out today and has got a positive review from IGN. I have been excited for this game since a long time. Thinking of buying the original from nextworld... partly because it's a new and a fresh game and partly because it's 3 DL-DVD game :O.

Discuss L.A. Noire in this thread
Click to expand...

^^^lol ty
despite that i know nothing about the game. Portal 2 is another.
However i think all the hype around the game is justified. trailers look slick.
OP

JojoTheDragon said:
This is how one should open a discussion thread.

This is a big NO.

My bad. Thanks for the correction.

Who is to blame for LA Noire crashes?
Sony and Rockstar issue joint statement.

waiting for the PC version hope they release it soon

pra_2006 said:
waiting for the PC version hope they release it soon
Click to expand...

There is no news about that so its hard to say that they would even release it for PC.

Looks like we are going to get some extra hours to play as DLC is rolling out and its dated.
Source

Burning in the skies

Rockstar release their games on PC but they take their time. I hope they release RDR first so that i can play it more properly. its one helluva of game.

Started the game today. So far so awesome.

Finished 7 cases so far. The gameplay is very realistic and makes you feel like a real detective. Some times its so tough read the suspects face, they really put up a good show. The intuition points really come in handy. The ask the community feature is really helpful but sometimes it leads a wrong answer as it just gives a total hit percentage of the options. So far i love it.

Staff member
This is what I was looking for all this time:-

L.A. Noire Is Coming for PC this Fall | Rockstar Games

Developed by Rockstar Leeds and built to run on a wide range of PCs, L.A. Noire's robust feature customization includes keyboard remapping and gamepad functionality to both optimize and customize performance and user experience. Along with increased fidelity and improved graphical enhancements, the PC version will also feature 3D support for an even greater sense of interaction and immersion within a painstakingly detailed 1940s Los Angeles.
Click to expand...

Awesome news you made my day errr... Night.

I am waiting for rdr to come on pcs.

Yeah really. I watched some gameplay videos of this game and thought that I would never be able to play this game as have PC only but now I can. Although I have to wait but wait will be worth it. Same thing happened when I heard that RE5 was coming to PC.

Gaurav265 said:
I am waiting for rdr to come on pcs.
Click to expand...