[Before beginning, I'd want to express my gratitude to Synology as well as digit for giving me the opportunity to review a Synology NAS device. Also, the views presented in the following review is based only on my own experience and should not be construed as conclusive either ways. Synology and/or Digit holds the right to overrule any stated fact/accusation accordingly.]

In the box
I received my Seagate Barracuda 1TB 7200rpm HDD about 1 week back from Digit, almost a week after receiving the NAS. Both were in good condition and properly packed (kudos to shipping team).
For the Synology NAS, here are the items that were shipped included in the box:
NOTE:
1.HDDs weren’t included with the NAS shipment and would generally have to be bought separately.
2. The whole thing is supposed to be powered by a monstrous 16A power socket (the “bigger than usual” power socket).


Setup
Physically setting up the NAS is not much of a hassle as long as you are referring to the provided quick installation guide. Also, if you’re installing a 3.5” hard drive you won’t require any additional (provided) accessory. If you’re still facing issues, follow some online tutorial video for the same.


Initiation
Since this is my first time getting my hands on a NAS DiskStation, I was honestly expecting to face a lot of issues and tripping overs. Apparently, it’s not even that vexed up. Infact, as a beginner, as long as you stick by default options setting it up will be a breeze, just note that it will be time consuming in certain aspects. When setting it up for the very first time, using Synology web assistant (find.synology.com) to install the respective DSM file with simple onscreen instruction makes the job a lot easier.
After finishing the setup and auto-restarting once, the user is prompted to their respective DSM which is your flashy main control panel for the whole device packed with a sweet compact UI, almost replicating a desktop. If you got this far, the next thing is setting up volumes from storage and pool and creating some shared user folders (considering multiple users will be accessing your NAS).
Other than that, the (optional yet useful) next thing to do is installing some great available applications via Synology’s exclusive application package center. Some apps I personally found best for my use case were: Moments and Drive Cloud backup. Also, we are talking about super easy one-click installations from the product center app, which again is a very impressive factor.
That’s pretty much everything to get started with your journey on the NAS!

Applications
As I previously mentioned, the DSM is rich in terms of offering functionality via applications, but out of the many apps some apps that I personally wish to comment on are:

A) File station (pre-installed): This is the sole app which makes navigation of my data/files so much easier and accessible! And all that while being on the DSM remotely is awesome.

B) Moments: This app is one of the primary reasons I was so enthusiastic about trying out the Synology NAS as a superior alternative to Google Photos, and I wasn’t disappointed either. Specially having the liberty to choose backing up of photos with certain extent of control (for instance the option to trigger backup only while charging).

C) Photo Station: Before anything, I wish to just ask one thing XD … why? Don’t get me wrong but I don’t see any point of having another exclusive app for pictures other than merging all implementations into one single app, let’s say: Moments.

D) Audio Station: This is bound to be one of the most used applications so far on my DSM! For someone who is an avid music listener and keeps his playlist downloaded, this is just too good. Auto sorting based on corresponding artists/composers/genres/folders and ability to create playlists with different settings are a good add-on as well. So, now I no longer need to hold back downloading and side-storing music concerned about my phone space.

E) Video Station: I was excited about streaming via my NAS drive, specially to test out how it performs with Blu-ray movies(files), and the experience was indeed rich. Even though it took a “lot” of time indexing the files foremost. Once done, I was able to access and stream my files easily across devices, though there was noticeable lag between playbacks.

F) Synology Drive: Likewise File Station, Drive is a platform I used for file storage too, though directly from my PC thanks to their windows Drive client. The primary use case of Drive was to backup my windows drives, so functionality wise I found it decently good.

G) Cloud Sync: Lastly, one of the most impressive aspect of DSM, is the Cloud Sync which I had setup as a bidirectional backup solution for my Google Drive, and it works like a charm!

File Transfer
This is the sole aspect of my experience with my NAS, that has disappointed me greatly so far. Previously, I owned an external HDD, which even if not being quite accessible did provide me good enough read/write speeds. My DiskStation on the other hand, contrasted it perfectly by giving me immense flexibility and accessibility of my files but with the sacrifice of decent speeds. I had my NAS connected to my home’s router via both the provided RJ45 Cables, and ran the following write test via my laptop which was connected to the same router’s Wi-Fi:

As you can see, the applicable speed and what am achieving in real-time are ground and sky apart. So, I tried to figure out a workaround to this and created a bond between both the cables connected to the router. I did get a significant increase in speed, so as to speak of (as can be seen below): 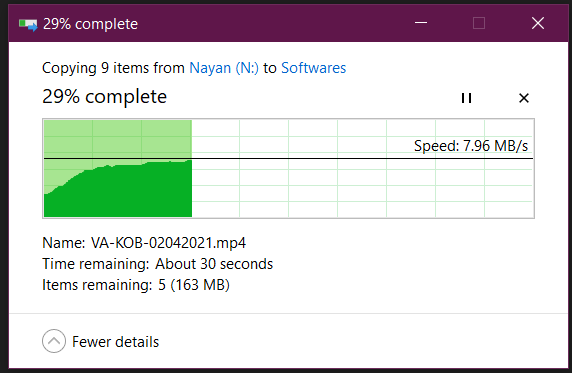 Even still, it is quite straying a bit far from my “expected” transfer rates, so I will assume am missing out something there. The time at hand to completely remark the device appeared indeed short to me (hope it also serves as an excuse for uploading this review so late) thus couldn’t tinker much regarding the speeds. Here’s how was running the transfer tests:
(If you think you can help me out with the problems, don’t hesitate to reach out my DM! I'll be eagerly waiting for a solution/justification of this issue, and upon stumbling across one, will edit this post accordingly too!)

Conclusion
Thus, the whole experience was kind of bittersweet to me, and my review and opinions were casted with the hue that I actually ‘bought’ the device to present my unbiased views. So, by pointing out the shortcomings I was aiming to justify the device’s approach towards being more value for money.
Also, I found it all the more reasonable to go for a NAS if you have a more concentric use case (like for a family or office) instead of a single individual given the easy and accessible individual profiling for multiple users. At the end of the day, I really won’t regret buying myself a Synology NAS DiskStation (or advising someone to purchase one either), given the features I’ll be investing for.