The Moto G is Motorola's most successful smartphone to date and has seen its fair share of upgrades in the form of the Moto G 4G and Dual-SIM variant but is yet to see it being replaced by a successor.

Although this is bound to happen we were yet to see the Moto G2 or Moto G second generation in the flesh (or plastic). Until now - an image has cropped up revealing what appears to be the successor to the Moto G. 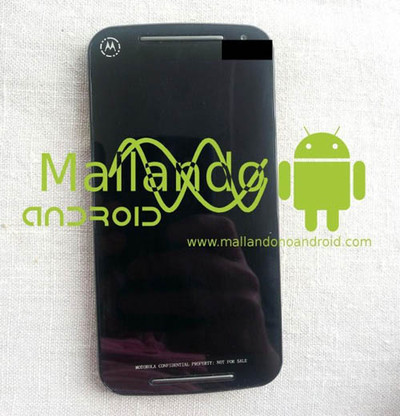 (Here is the high resolution pic)​
The device has taken some design queues from the Moto E with a front-facing speaker grille.

A whiff of the specs has also been provided but they don't look too promising. The chipset is said to be the same Qualcomm Snapdragon 400 including an Adreno 305 GPU, the screen of unknown size has a 720p resolution, there's dual-SIM slots and an 8 MP snapper.

Only the last bit is an upgrade so far as the original Moto G has only a 5 MP shooter. Keep in mind that these specs might be subject to change with the same being said about the design in the image.

But in order to keep the same modest price attached Motorola, now owned by Lenovo, might as well be frugal with the upgrades.

Will this really be the successor to Moto G ? I feel bad for those expecting a little more. Moto G was the first one to challenge Nexus 4. That other phones began offering even better specs at a lower price is another story.

But the question is, will the next version of Moto G be able to take on the Nexus 6 ? (SHAMU)

Staff member
Admin
Moto G was never meant to be "Nexus Killer". It was good when it was released and benchmarks were high, since Nexus 4 was released way before. But to compare next gen Moto G with Nexus 6 is plain wrong. Nexus series in a whole difference league altogether.

True, Moto just happened to measure upto Nexus by chance. They did a great job of optimizing and ended up with better than expected performance. Maybe I'm a bit disappointed by their idea of a successor. That $50 phone went a bit too far. I'm not complaining that it shouldn't exist, but the budget Nexus thing seems like a distant dream now.

With high-specs-low-price race getting taken over by the Chinese army, there is little other companies can do to deliver similar products. I was looking forward to an even more impressive Moto G2, but this Lenovo takeover seems to have an effect, maybe.
You must log in or register to reply here.
Share:
Facebook Twitter Reddit Pinterest Tumblr WhatsApp Email Share Link
Top Bottom