As requested by some of you. Some details on UEFI Shell

UEFI enables accessing at least FAT file system as well as running efi applications. UEFI Shell is an element of UEFI and it can be sort of considered as a command prompt (a small OS / efi app that runs on top of UEFI) that can run a number of shell commands. These commands can be informative, file system level, boot related, config related, device related and so on.
Most desktop motherboards with UEFI firmware at least mid-range to high end have UEFI shell built-in in the UEFI. Some laptop firmware’s also have it. Others simply have a pointer or link to it in the boot order, where it expects shell.efi file (efi application) on the EFI partition or similar.

If your UEFI does not have built-in shell, how to boot to it.
Go to boot menu and select this pen drive to boot.
UEFI is designed to have a fallback boot whereby it will also look for bootx64.efi (on 64 bit implementation) at \EFI\Boot on pen drive or EFI partition, if there’s no defined boot order entry.
This method also confirms if your Firmware supports UEFI booting or not in reality! More applicable for those systems that had something called hybrid efi boards.
Shell will look something similar to this. 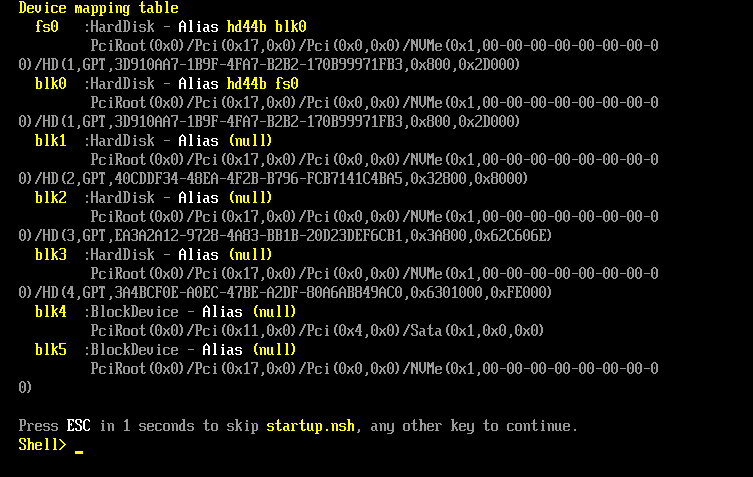 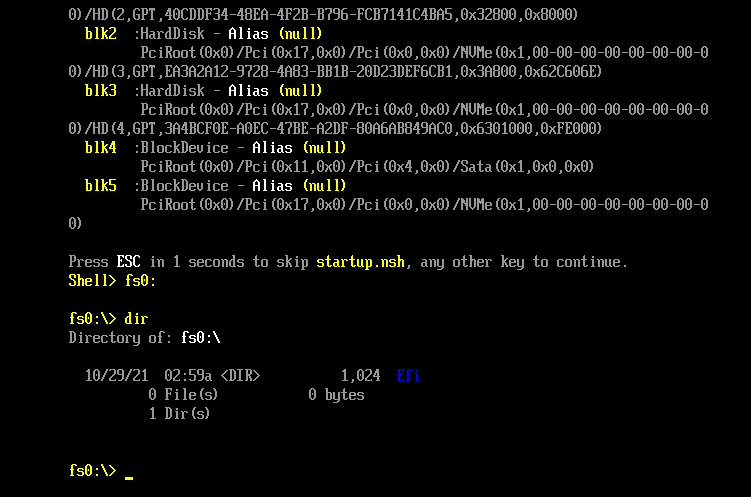 Few things I do with shell are

You can save Shell.efi on EFI partition and create a boot entry to it as well. This is what I have done.
I always have UEFI Shell to boot to as yet another boot option. This is how my boot options look like.

Shell environment can also be used to flash firmware. Generally more common in enterprise environment. Scripts are possible using .nsh scripting files on Shell. Command names are inherited from Windows and Linux but they are essentially UEFI Shell commands, neither Windows nor Linux!

Help is available by simply typing Help <command> -b
-b switch is useful to pause at the screen break!

How to boot to Shell if you want to enable secure boot? Well for built-in shell there’s no issue but if you want to boot to shell.efi when secure boot is ON, you need to create your own self-signed certificate. Use private key to sign shell.efi and push public certificate in UEFI Secure Boot db database (If your UEFI supports such interface to update db, some simply don’t)