All of this due to promote there rubbish windows 8 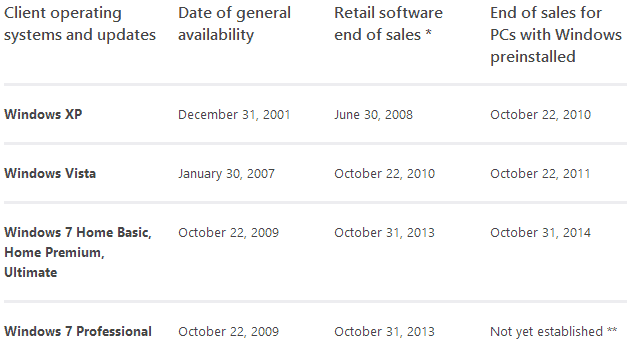 If you are a Windows user who does not like Windows 8 for one reason or the other but decided to buy a new PC, it is likely that you picked Windows 7 as your operating system of choice for it.

But, if you have not picked up a license of Windows 7 yet, then you may want to consider doing so this year as Microsoft has updated its end of sales information page.

When a product reaches end of sales, it is "no longer shipped to retailers or Original Equipment Manufacturers (OEMs)".

While that does not mean that existing copies will get removed, it is likely that it gets difficult to get your hands on a copy as OEMs may not build new products using the operating system once it reaches end of sales.

The version missing? Windows 7 Professional. No date has been given yet, but Microsoft noted on the page that it will give one year of notice prior to the end of sales date for that operation system. This means that Windows 7 Professional will continue to be distributed to OEMs and retailers until at least February 2015.
Sourcei + Source
T

Yeah, I don't like this news at all. I personally don't hate Windows 8/8.1. I have installed it twice on my laptop, 8.1, with tiles view disabled and some modifications to make it as close as possible to Windows 7, but sorry not my cup of tea. Yes, boot up time is at least 50% faster than Win 7, I loved the graphical presentation of transfer rate and the pause feature, but not enough to buy me from Windows 7. They should support 7 for at least another couple of years.

Win 7 is really popular, i expected them to support it Atleast 2 years more. Anyway I've been dual booting win 8.1 with 7 and contrary to popular opinion i actually like it, nothing's holding me back from making a complete switch to 8 if i have to