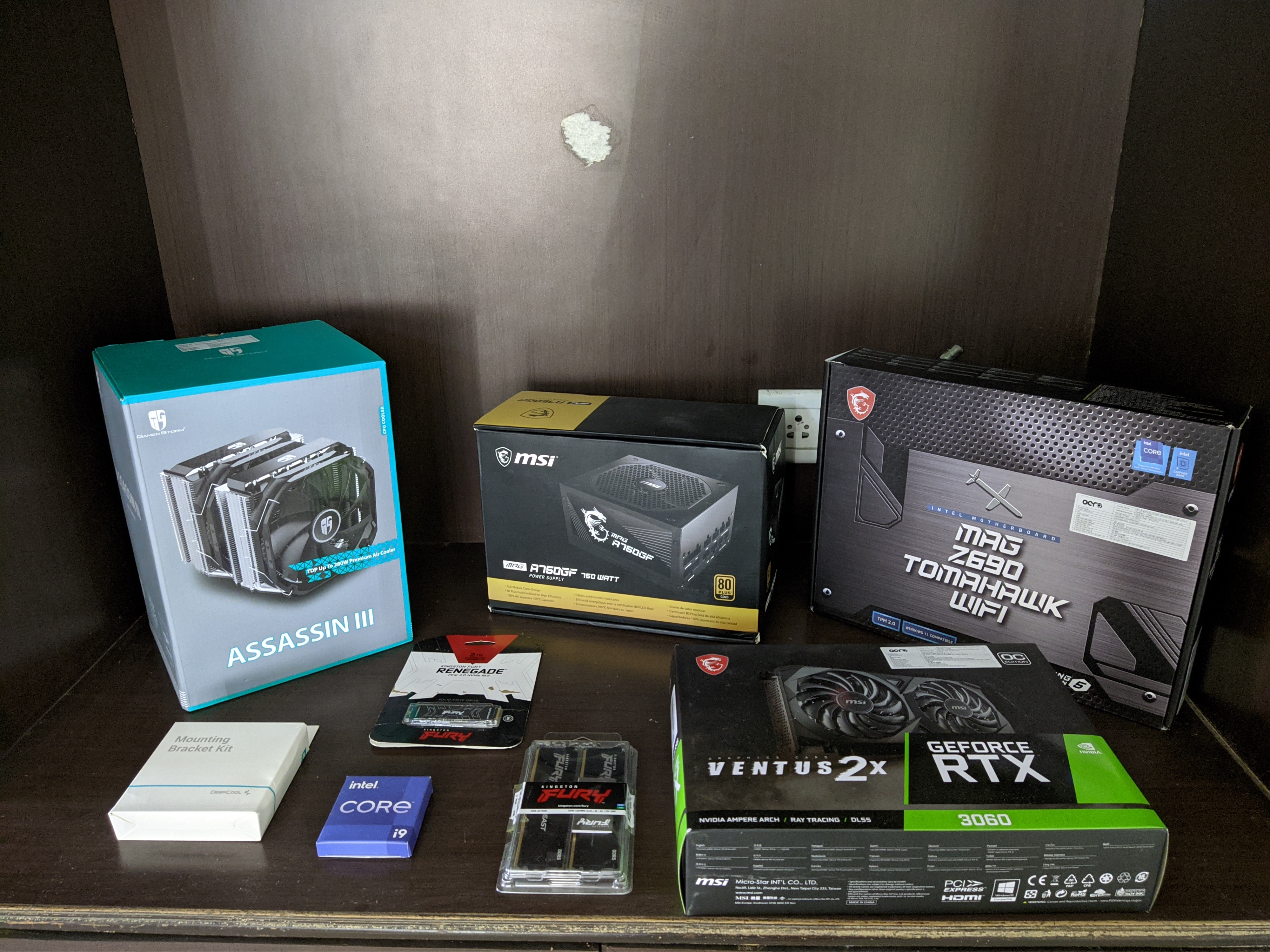 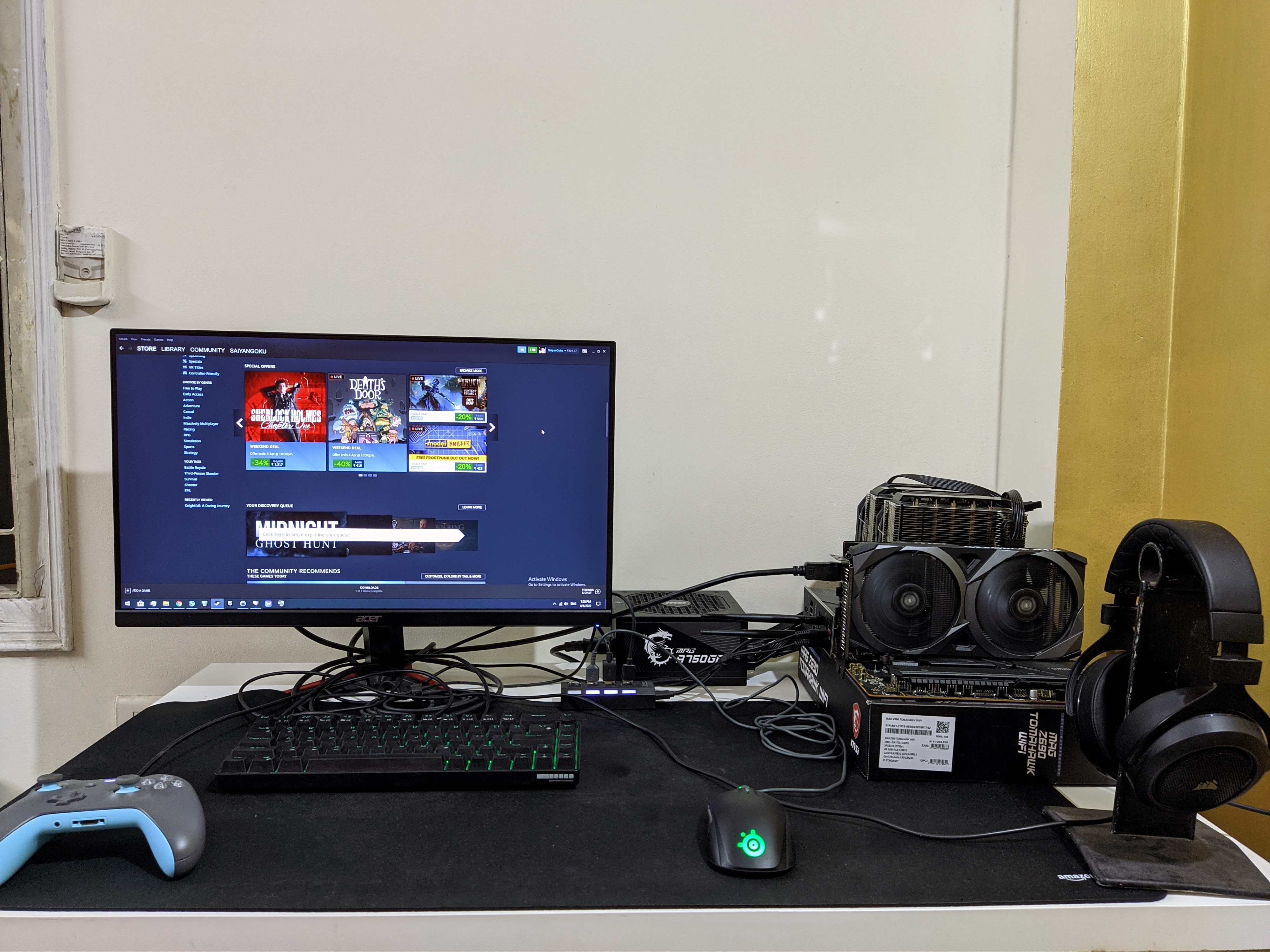 There are links to each part from their respective manufacturer's website so that you can go over the official specifications and where to buy them from.

The star of the show is cladded in metal heatsinks (which I assume is Aluminium) and they really are necessary to prevent over heating. These are somewhat low profile and do not have RGB (so, no +10% FPS) which is a good thing from my point of view. Consumer DDR5 RAM, unlike DDR4, has it's own Power Management integrated circuits (PMIC) and Voltage Regulation Modules (VRM) on the DIMM. Earlier, both of these were handled by the motherboard. This is the reason why there isn't a single motherboard which supports both DDR4 and DDR5 DIMMS simultaneously, even when the CPU can support it, at least from a major manufacturer. You can get away with using bare DDR4 DIMMs but I wouldn't risk doing the same with DDR5 DIMMs. It would be even better if your case has cool air flowing directly over the modules. I never thought that RAM would get as fast as or even faster than the CPU itself since i9-12900k is rated at 5.2GHz. 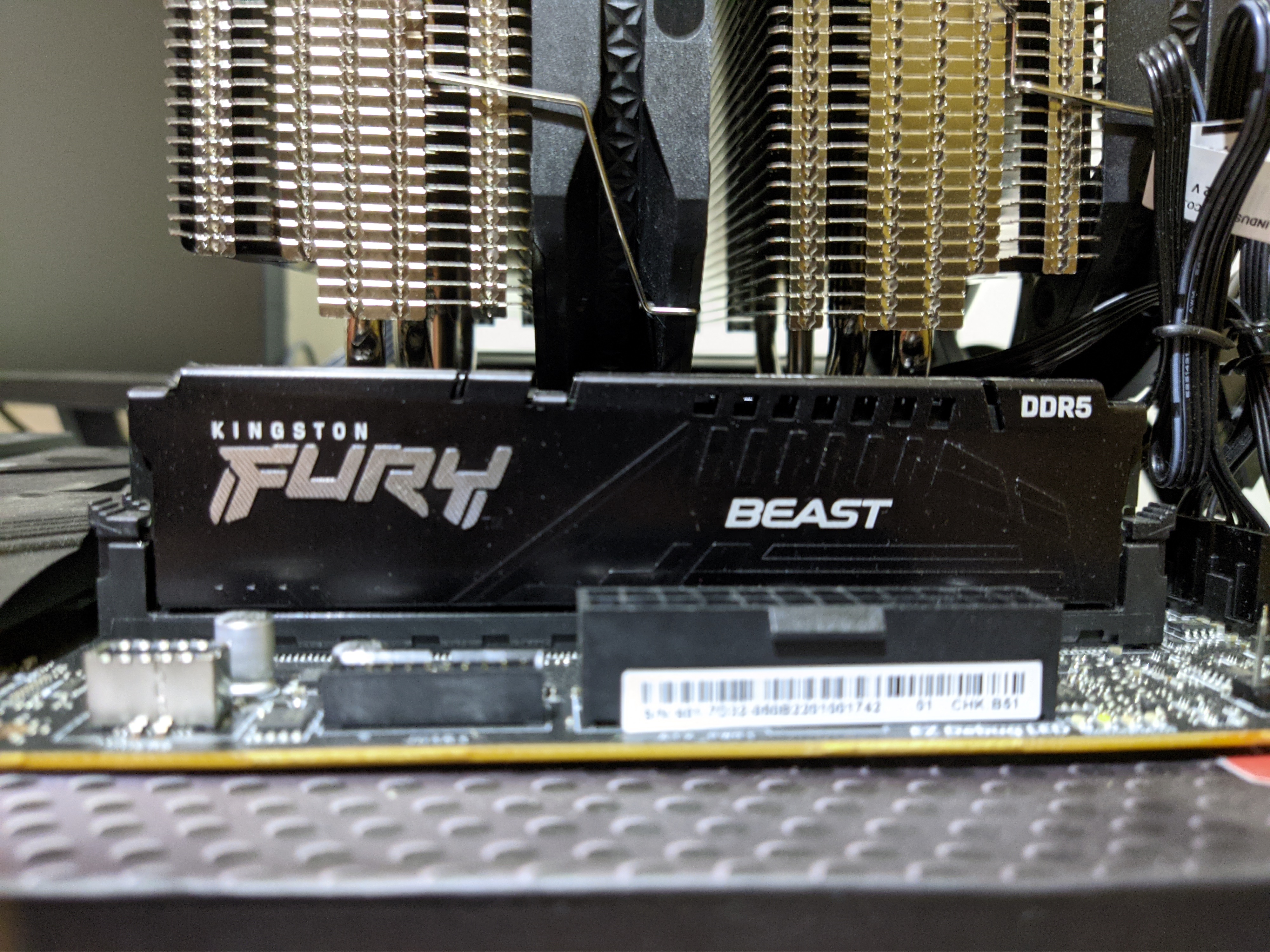 The Setup:
For my open bench setup, I referred the motherboard manual first. RAM went to the designated slots for dual channel operation. I put the SSD in PCIe NVMe Slot no 1 which is directly connected to the CPU. Then, I connected the GPU to top x16 slot, put the CPU and cooler such that the fans would have been pushing air towards the top of the case. For the entirety of the tests, I was touching the ram heat spreader. While it got a bit warm, it never became too hot to touch. My ambient temperatures were around 40° C and only ceiling fan was powered on. I limited the CPU power limits to PL1=200W and PL2=241W using Intel XTU since the default power limits were set to 4096W (YIKES!!) 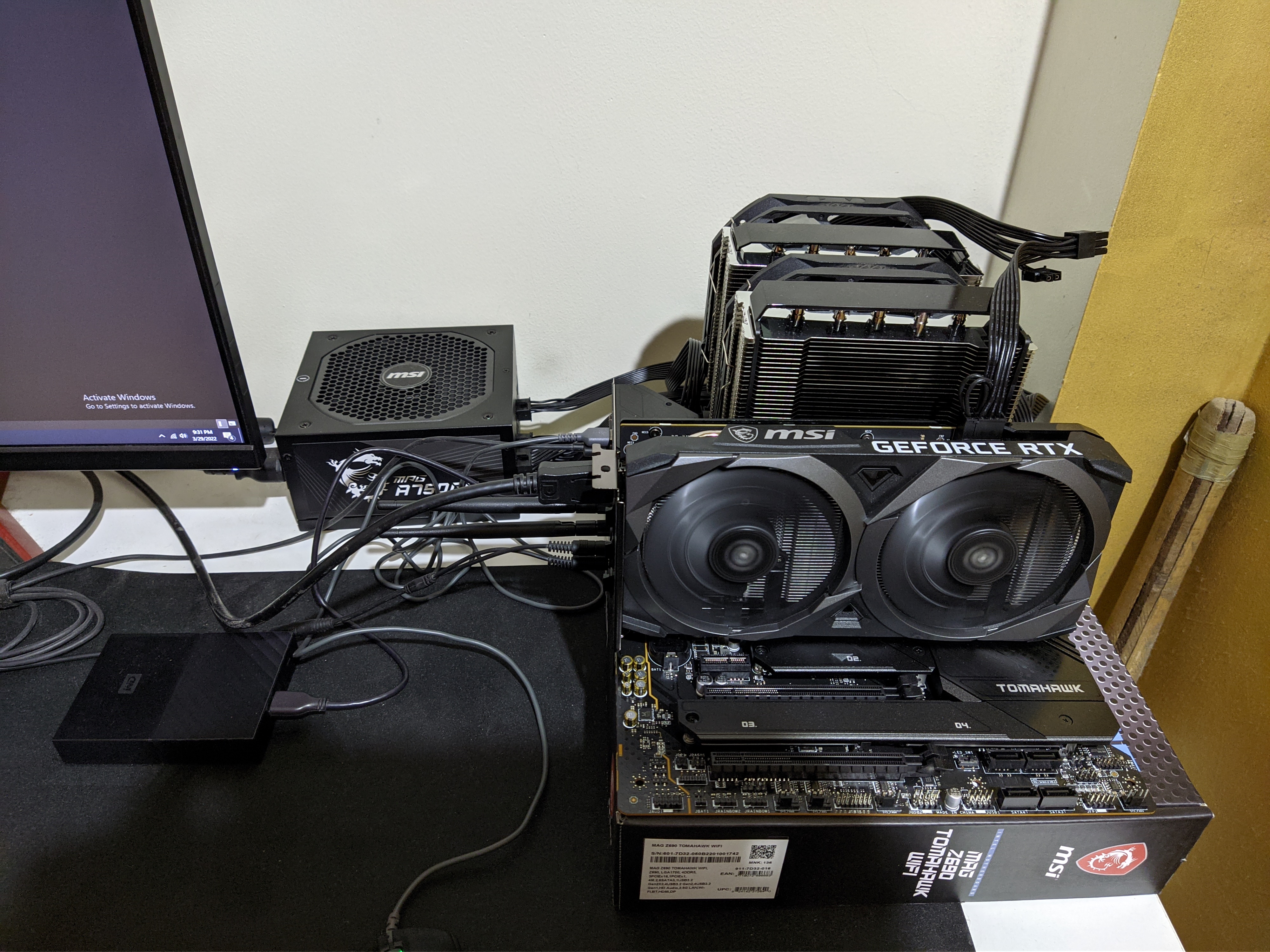 I have mixed usage and any comparisons to DDR4 performance are based on my current laptop (mentioned in signature). 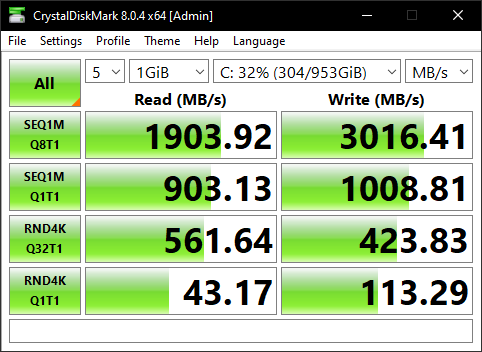 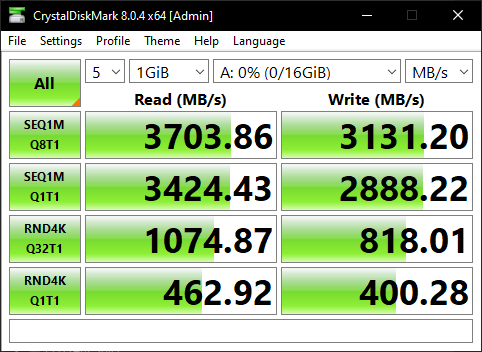 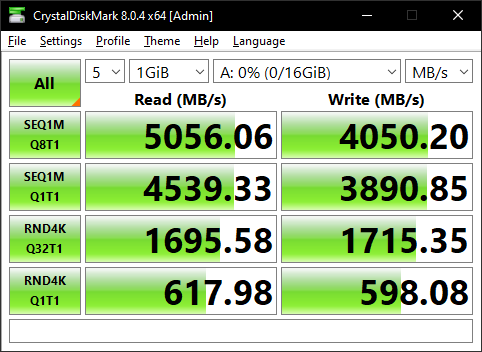 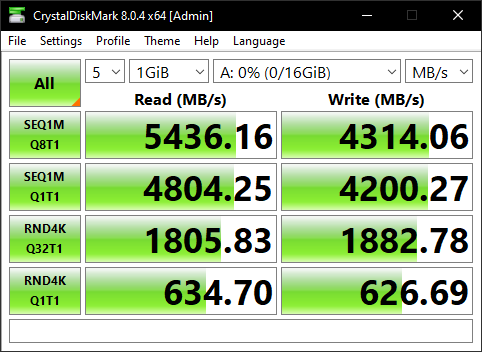 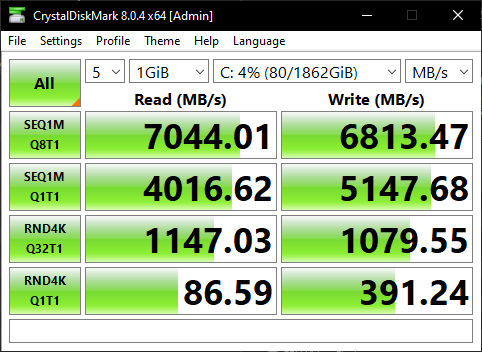 Benchmark Conclusion: DDR4 2666 is already faster than a PCIe Gen3 x4 SSD by a minimum of 91% and as high as 972%. DDR5 just makes the latter look even worse. DDR5 is atleast 37% faster than DDR4 and 43% faster than the same SSD. PCIe Gen4 SSDs sit at the top for Read/Writes currently but faster RAM in future should eventually surpass them as well. The Random 4KiB read/write values of DDR5 RamDisk are higher than Sequential read/write speeds of SATA SSDs (which is usually used for advertisement purposes). I never thought SSD would be a bottleneck for RAM. Potential buyers should not buy SATA SSDs for a DDR5 build. 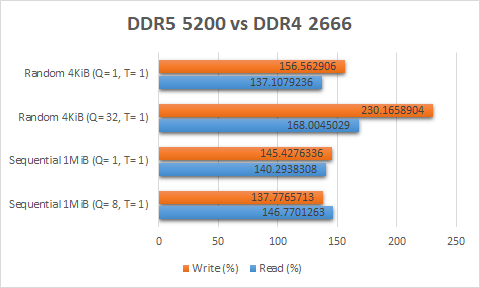 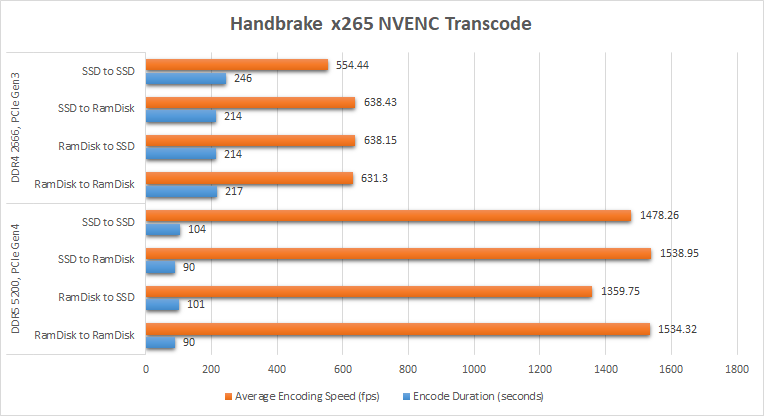 By using a RamDisk, you can save good amount of writes to your SSD and prolong its life if yours is a low endurance one. As most people are used to the 4th scenario they can save around 13% of time if they choose to opt for either 1 or 3. Also, there a massive reduction of around 58% transcoding time when comparing DDR4 vs DDR5 RamDisks. 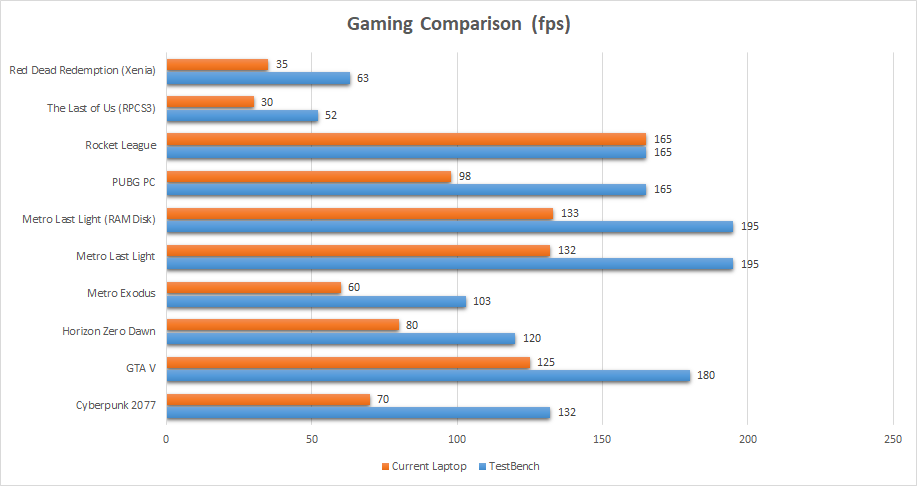 The games were configured to a mix of medium-high preset at 1080p with ray tracing and DLSS both set to off.
This how they performed:


The test bench was 60% better than my current laptop in native PC games. I capped Rocket League to 165 fps because that's the refresh rate of my monitor and going above that hasn't made any difference till today in the same.

I will not be explaining how to setup the emulators since there are better guides available on YouTube. The test bench was 73% better in RPCS3, which is CPU intensive while it was 80% better in Xenia since it prefers GPU more. I do play PS2 games on my laptop but since phones have started to get powerful enough and have decent PS2 emulators, spending time on testing it was a moot point. Same is applicable for other retro consoles.

Just to see if there would be any performance delta, I moved Metro Last Light Redux from the SSD to RAMDisk. Needless to say, the performance was identical. As it was during the synthetic tests, RAM heat spreader wasn't too hot to touch.

VRAM usage in all cases never exceeded 6 GB. This would seem like a rant but 12 GB VRAM for a RTX 3060 is overkill in my opinion. 8GB would've been more than enough and could've saved some cost to the end consumer.
Last edited: May 17, 2022
OP

Final words:
DDR5 RAM works as an incremental upgrade over sub 4000 MT/s DDR4 RAM but there's an early adopter tax, which is the trend across every newer hardware launch. The prices would eventually normalize, just like it happened with DDR4 when DDR3 used to be mainstream since the latter is on its way to being obsolete.

Official links to products provided by Digit and Kingston for the review:
RAM: Kingston FURY