Play as Marcus Holloway, a brilliant young hacker living in the birthplace of the tech revolution, the San Francisco Bay Area.

Team up with Dedsec, a notorious group of hackers, to execute the biggest hack in history; take down ctOS 2.0, an invasive operating system being used by criminal masterminds to monitor and manipulate citizens on a massive scale. 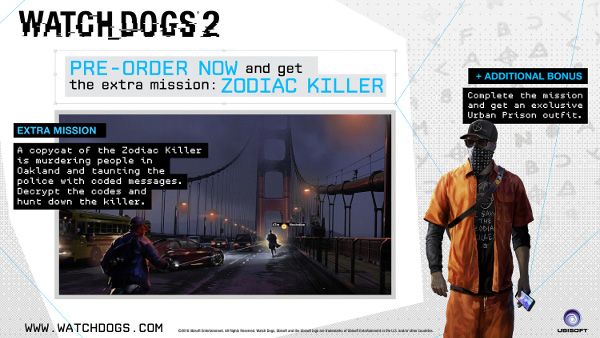 ​
Pre-order now and get access to an extra mission: Zodiac Killer.

An unwanted ghost of San Francisco’s past has resurfaced after fifty years. A killer is staging the bodies of his victims all over Oakland like the infamous Zodiac Killer of the Sixties, and he’s taunting the police and news outlets with coded messages. Will you succeed in decrypting the messages and hunting down the copycat? 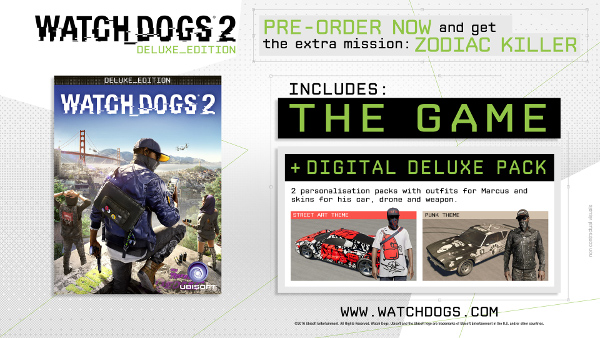 Pre-order now the Watch Dogs®2 Deluxe Edition and get access to :
- The game
- The Deluxe Pack : 2 personalisation packs 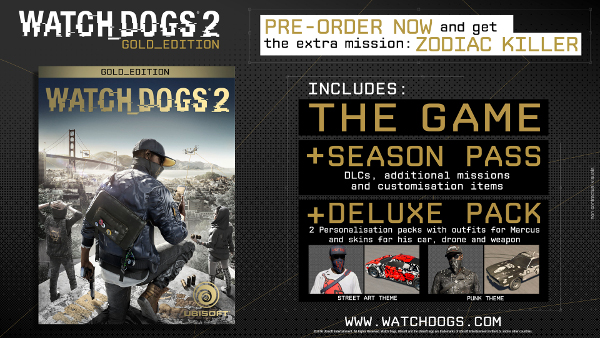 Pre-order now the Watch Dogs®2 Gold Edition and get access to :
- The game
- The Deluxe Pack : 2 personalisation packs
- The Season Pass

With the Season Pass, get access to all DLC packs and exclusive benefits. More details to be revealed soon !

And I thought Watch Dogs 1 was a failure so there won't be any sequels. Silly me.

gameranand said:
And I thought Watch Dogs 1 was a failure so there won't be any sequels. Silly me.
Click to expand...

It created massive hype and its a new genre . . Hope they do the optimization well this time!!
G

ariftwister said:
It created massive hype and its a new genre . . Hope they do the optimization well this time!!
Click to expand...

the gameplay was repetitive & boring af

For a single game yes it was nice but for a series ? Nope, it doesn't have that charm.

ariftwister said:
It created massive hype and its a new genre . . Hope they do the optimization well this time!!
Click to expand...

Its just another GTA copy with just hacking that isn't innovative also
Click to expand...

Just because you can do everything in this game and a free open world like GTA doesn't mean that every open world game is a GTA clone. Saints Row series broken that stereotype with their funny and weird settings.
Yes its true that we always try to compare games to one another but directly slapping a genre to a single game or series is not good. Watch Dogs had some special things up its sleeve, it failed to meet the high expectations, especially in visuals department but it was a fun game nonetheless. MP could have been great but it wasn't given much modes and polishing and fell on its face.
If Ubisoft goes to their roots then we should not forget that they brought up AC1 when the super hyped AC1 didn't meet the expectations of the customers. And AC2 was a damn good game. Same goes for FC3 after FC2. Ubisoft have a knack for finding the errors and working and polishing on it. Lets hope that they do it again this time and we get a great open world game with limitless possibilities.

i actually loved the first one
OP

Do this on Watch Dog's website.
1) go to Explore the future of Watch Dogs
2) and press Ctrl + U
OP

Live to die another day

Look at the tags for the game..
It says illuminati , dating sim etc.. Lmfao

Gameplay including co-op and MP

Its interesting. Ubi is making most of their game as Co-op. Far Cry 4 and others are examples. They already know this thing and they are using it. I like it.

I am pretty excited to try this out. Watch Dogs 1 was good but had a few problems and the sequel promises to get those fixed. I am especially looking forward to a better driving experience, drones, new hacks and of course the co-op
OP

Staff member
Ubisoft has revealed the Watch Dogs 2 system requirements, and with them a new release date for the PC version of the game. Spoiler: it's not coming out early.

Yep, the PC release of a Ubisoft game has been delayed—try to contain your shock. Fortunately, it's a brief extra wait—the game is now scheduled to come our way on November 29 instead of November 15—and it sounds like the extra time is going toward a good cause.

When it does come out, here's what you'll need to get in on the action:

Ubi also announced a number of "special enhancements" coming to the PC edition of the game, which is why it's taking the extra time to nail things down:

Screen Space Reflections
Headlight Shadows – Support for additional shadows from car headlights
Extra Details Options – Increases the level of detail for all objects in the game, and adds more details to objects in the distance.
Improved Graphics Options

Full adaptation with mouse and keyboard
We’re using raw mouse input to reduce latency and use the Windows hardware cursor throughout the game without any additional signal filtering to smooth or accelerate mouse movement by default
Advanced keyboard support – Keyboard hotkeys for every menu and app for faster access. Additionally, all hotkeys can be remapped.
Mouse-centric UI – Any UI screen, menus or smartphone app supports full mouse interaction, so the player can finish any UI task with the mouse only. Everything is clickable and has appropriate button states.
Toggle/Hold modes for different controls (aim, sprint, walk, inventory, etc.)
Driving

On-the-fly switching between mouse and keyboard to gamepad, without any additional options, UI will just switch to gamepad mode
Supported gamepads: Xbox 360 and Xbox One controllers, third-party XInput gamepads (everything Xbox-based), PlayStation 4 Controller. We do not officially support Direct Input gamepads, Steam controllers or game wheels.
To be fair, that's a lot of extra jazz, and if the extra couple of weeks means Watch Dogs 2 comes out smooth and stable on a wide range of hardware—including the really high-end stuff—then it will be time well spent. Whether it can prove itself to be more than "another stylish hacktivist yarn that refuses to follow through on its premise" remains to be seen, but one thing at a time.

Just hoping that the time they are taking for PC release date delay is for good cause. WD1 was a mess at release. I hope they don't repeat the mistake again. And finally start discounting WD1 at 75%, now that WD2 would be released.