[Spoilers] Rings of Power and House of the Dragon

Staff member
Admin
There are a lot of theories now on who is Sauron. Contenders are Meteor Man (officially The Stranger), Halbrand and Adar.
Think Adar is closest to it, but could be someone else. Would be poetic if its Halbrand as he is under Galadriel's nose all the time. Think Annatar (Sauron) appears in Eregion with gifts, and Galadriel is suspicious along with Gil-Galad. Think Meteor Man is Gandalf, or at best Radagast.

Really liking Durin and Elrond, best parts in the show.

First episode itself had ice wall climbing, a red comet and sea dragons, it looked like they went out to make a Game of Thrones version drawn from the material in Tolkein's Legendarium.

Over at Westeros, they did not show the Greens vs Blacks divide clearly yet, the two camps should have been defined clearly. Nice to see so many dragons on screen at once though. Looking forward to Cannibal. Letting Laenor stay alive seems like a bit of a miscalculation on the part of Rhaenyra and Daemon.

Staff member
Admin
I'm yet to watch either.

Why RINGs of Power and House of dragon in single thread ?
OP

Won't even waste time on Rings of Power for wokeness BS. I thought about watching House Of Dragon just because of Matt Smith.

House of the dragon, just doesnt feel the same. Its hard to take threats in HOD seriously.

I have yet to read Fire and Blood, so I dont know whats coming.

Not even gonna watch Rings of Power.
OP

Staff member
Admin
^oh perfect then, what you thought Halaena Targaryen was saying?

Anorion said:
Both of them are trying hard to be "diverse"
Click to expand...

Did they ?
Can you quote in spoilers what changed from FAB.

I haven't seen latest episodes. Quite busy nowadays with work and interviews

Anorion said:
^oh perfect then, what you thought Halaena Targaryen was saying?
Click to expand...

Nerevarine said:
Did they ?
Can you quote in spoilers what changed from FAB.
Click to expand...

One big change is Valyrians not having purple eyes. A famous albino, known as The White Worm is not albino. Like Corlys and family would have looked even more awesome with purple eyes, since they gave them the white/silver hair anyway, and Mysaria should have been albino irrespective of her race. It is difficult to place her accent in Westeros, she may be from Lys, like Doreah.

Laenor is killed in the books, Vaemond is fed to a dragons, Laena does not get mercy-killed by Vhagar, but instead succumbs to complications after childbirth. It is implied that Daemon had a role to play in the death of Rhea Royce, but he was not at The Vale when it happened. She also dies a few days later from her injuries, and would have identified Daemon as her killer. The biggest most irritating change is Allicent mistinterpreting the dream of Viserys, that never happens in the books. Then... the book is an attempt at reconciling multiple unreliable narratives by another unreliable narrator, so the ambiguity of the events are not preserved in the show, which would have been an incredibly difficult task. But a fan favorite character, Mushroom is just written out of the show, unless he was the dwarf shown playing the drums during the wedding. Uhhh... yeah, also the ages of the characters have been adjusted upwards to make pairings more suitable for depiction on screen, but that was done in GoT as well.
Last edited: Oct 12, 2022

Reading all that, I could infer that the element of viewer interpretation is gone from this. Unlike season 1-5 of GOT. Especially the part you said about the death of Rhea. I haven't watched any episode after that but the show is getting watered down for people who do not want to think. This is what happened towards ending of GOT

Kinda offtopic, but Anorion have u read The Kingkiller chronicle ?
OP

Staff member
Admin
Hey wait, whole thread has spoiler warning lol! I am going to remove the spoiler tag. I don't think dumbing down is the case... like the intro sequence itself needs a lot of deciphering and figuring out. The ramblings of Helaena Targaryen is another example. There is plenty of scope for metadiscussions, and Paddy, the actor who plays Viserys is an absolute beast in the latest episode (episode 8).

It is in fact, quite the opposite, those who are only watching the show may be lost in all the new characters, the frequent time-jumps, and wondering what is happening. For example, the show has not made it clear that there are two factions, the Greens and Blacks. I expected fans to be divided into these two factions by now, declaring their allegiance, sporting badges on social media and so on. Most people who are watching the show without reading the books are not even aware that these two factions exist. Hopefully, the last two episodes may change that.

No have not read Kingkiller chronicle. It is on my list. Re-reading all the Osten Ard books right now.
Last edited: Oct 12, 2022

Is House of Dragon connected to Game of Thrones ? And Rings of Power with Lord of the Rings ?
OP

Staff member
Admin
^Both are prequel series. Rings of Power is set an age before Lord of the Rings, Galadriel and Elrond are around, we see the Wizards like Gandalf showing up, and the ancestors of other characters such as Aragorn (Isildur), and most of the dwarves from The Hobbit (Durin is the ancestor of seven of them, including Thorin, and Dain, who fought in the Battle of the Five Armies, but was not in Thorin's company). We also see Durin's Bane, the same balrog that Gandalf killed in Moria.

There are some scenes from the first age, but the Valar and Morgoth are not shown directly. The funny thing is, much of the time period that is shown in Rings of Power is outlined in The Silmarillion and other works in the Tolkien Legendarium, such as the Tales of Middle Earth, but Amazon only got rights to The Hobbit, The Lord of the Rings and its appendices, so they have to pull off something very tricky. They cannot show something that is in The Silmarillion, but not mentioned in the two books that they have the rights to, it has to be set in the second age, cannot contradict anything in the legendarium, but they are allowed to fill in the gaps.

The result is a Game of Thrones prequel set in Middle Earth, complete with a red comet, ice wall climbing, sea dragons, valyrian daggers (don't even ask), and this frame which can be straight out of Dance of the Dragons (it is from Rings of Power). 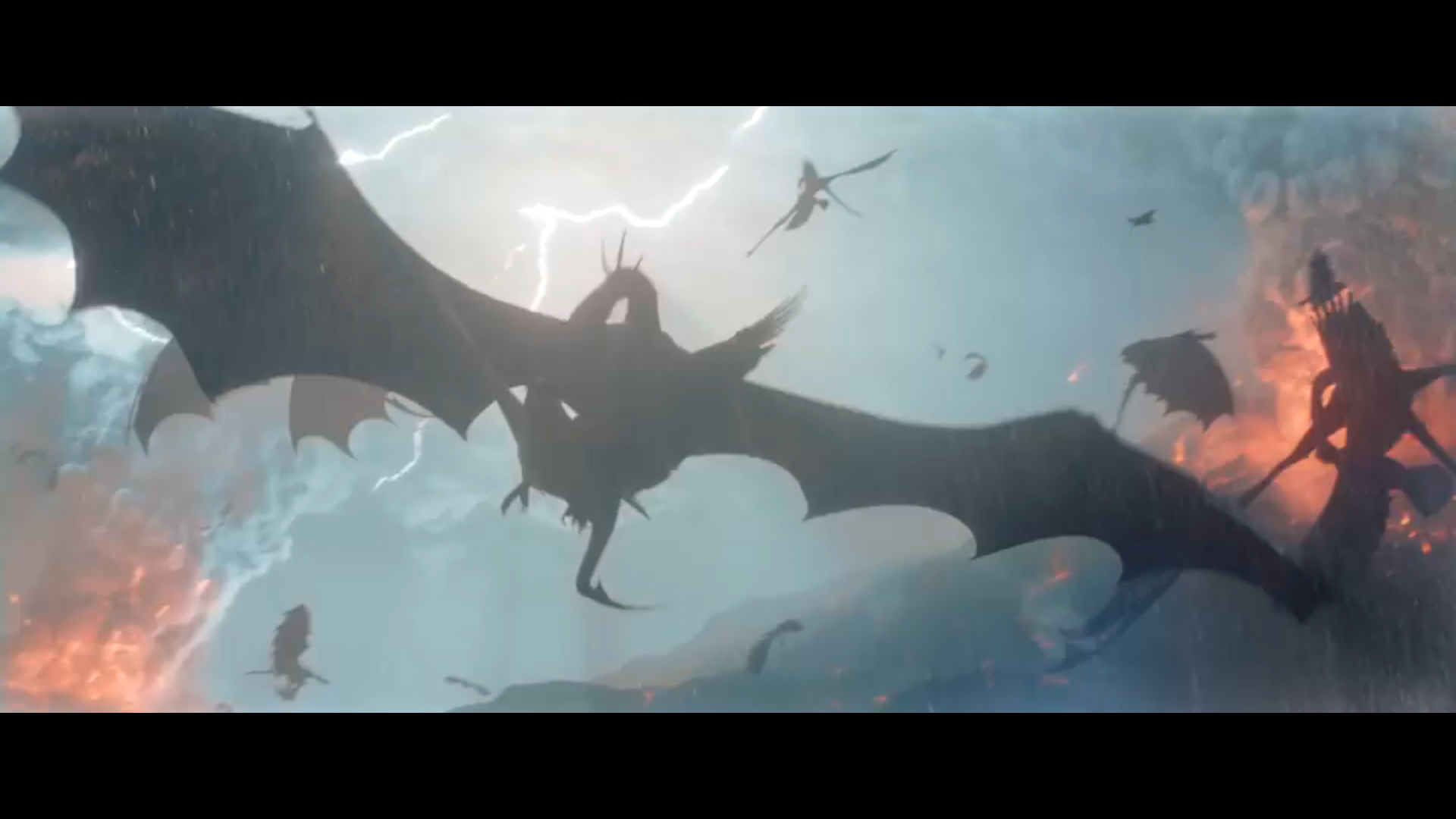 On a personal note, my username is the translation of my name into Quenya after consuming the Tolkien Legendarium as a kid, but there is actually a character by that name, Anárion is the brother of Isildur, never imagined that anyone would be interested in adapting that story to the screen, but it is happening now!

House of the Dragon starts with the rule of King Jaehaerys Targaryen, the fourth ruler in the dynasty after Aegon the Conqueror. It is set 200 years before the events in Game of Thrones, and tells the story of a deadly civil war that takes between factions amongst the Targaryens. It tells the bloody history of Westeros, and how the great houses were vying for power. It has the ancestors of the Starks, Arryns, Lannisters, Greyjoys and many of the 250+ houses that were written out of Game of Thrones.

A short version is Valyria fell in a great cataclysm, Targaryens fled to Westeros before it happened, and used their dragons to subjugate six of the seven kingdoms in Westeros. Then the Dance of Dragons (better name is Dying of the Dragons) happened, where Alicent Hightower, wife of Viserys Targaryen fought with Rhaenyra Targaryen and her uncle-husband Daemon Targaryen (the brother of Viserys) over who would rule the Iron Throne. Most of the living dragons died during this fight, decimating the royal dynasty, and resulting in the deaths of many Targaryens, paving the way for their downfall. Then Daeron Targaryen finally conquers Dorne, which unites the seven kingdoms in Westeros under a single rule. Then there was another civil war, a series of Blackfyre Rebellions. After that, came Robert's Rebellion, where the Targaryen dynasty was overthrown, leading up to the events seen in A Game of Thrones.

Fantasy is described as a stew pot, so there is a lot of DNA from Tolkien Legendarium in ASOIAF, and a lot of what made Game of Thrones click has made it to Rings of Power.

For conlang lovers, there is considerable on-screen depiction of Quenya in Rings of Power, and High Valyrian in House of the Dragon.
Last edited: Oct 12, 2022

Zangetsu said:
Is House of Dragon connected to Game of Thrones ? And Rings of Power with Lord of the Rings ?
Click to expand...

Zangetsu said:
Is House of Dragon connected to Game of Thrones ? And Rings of Power with Lord of the Rings ?
Click to expand...

House of Dragon is Amazon's interpretation of How to Train Your Dragon and Rings of Power is related to MCU's Shang Chi. Don't know how they got distribution rights for them.
OP

Staff member
Admin
So Halbrand is Sauron. Galadriel is suddenly suspicious of him. The most important moment in the whole series, and they rushed through it. The three rings get made, somehow.
Meteor Man is an Istari, could be Gandalf or Saruman, or one of the blue wizards. Think it is Gandalf because of the way he gets thrown about.
You must log in or register to reply here.
Share:
Facebook Twitter Reddit Pinterest Tumblr WhatsApp Email Share Link
Top Bottom