Personal computer buyers often ask questions about technical features such as hard drives and microprocessors. Ken Musgrave hopes to inspire a different kind of customer query: "Does that come in pink?"

Mr. Musgrave, an executive in Dell Inc.'s design group, is trying to inject a sense of style into the company's PCs, with new shapes, sizes and colors. One of its notebooks, the Inspiron, does come in pink -- not to mention blue, red, black, green, white, yellow and brown. 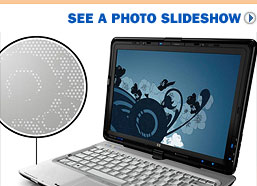 Spurred in part by the success of Apple Inc.'s innovative products, as well as a consumer shift toward notebook computers, PC makers have begun a radical overhaul of their machines' appearance. They're racing to replace boring boxes with sexy silhouettes that will differentiate their products, entice new buyers and command higher prices.

In the process, they're hoping to compensate for factors over which they have little control, such as software options. Unlike Apple, famous for its easy-to-use operating system and other original programs, PC makers largely rely on Microsoft Corp. for the underlying software. And that company's latest version of Windows, called Vista, has been panned by some reviewers, despite healthy sales.

The new focus on looks -- underscored by exhibitors at the Consumer Electronics Show, which opens Sunday in Las Vegas -- is forcing PC makers to re-think how they manufacture, whom they hire, how they advertise products, and where they sell them.

Why all the action now? Though PC sales are surging throughout emerging economies, PC makers need new ways to spur consumer demand in the U.S. and other mature markets. By wooing buyers who care little about technical features, they hope to better tailor PCs to specific users -- including women, students, PC gamers and sports fans.

Moreover, it's unclear if most consumers will pay a premium for style. Companies that focus too much on fashion over function could end up with costly misses as trendy designs fall out of favor with fickle consumers.

"It's a very dangerous route to go," says Sohrab Vossoughi, founder and president of Ziba Design, which has designed PC prototypes for Intel. "Things go up, and things go down."

A possible pitfall, notes Mr. Vossoughi, is misinterpreting the lessons of Apple's success, which is hardly based on design alone. Rather, Apple's forte has been to create synergies among its hardware, software and retail stores in order to make its cool machines more au courant and simpler to use.

But for customers like Glenn Pingol, who works in in-flight services for United Airlines, looks do matter. The 40-year-old says he doesn't hesitate to shell out more money for a machine that blends better with his home décor. "I have a PC as well, but I find Macs more distinctive," says Mr. Pingol, who was recently eyeing the new iMac desktop at the downtown San Francisco Apple store. "It's the wow factor, and PCs just can't master that."

Forrester Research, which has extensively surveyed consumers' computing habits, issued a report last June heralding a new "age of style" in the PC market. It concluded that more attractive models could command $150 to $250 more per machine.

PC vendors also hope to emulate Apple's healthy profitability, which is at least partly due to the higher prices it commands on some Mac models. The company reported a 33.6% gross profit margin in its fiscal fourth quarter ended Sept. 29. Dell, by comparison, reported an 18.5% gross margin in its fiscal third quarter, which ended Nov. 2.

Hewlett-Packard Co., which leads PC sales globally, is offering notebooks embossed with black and silver dragons. Dell, synonymous with cookie-cutter corporate PCs, has developed a flat-panel monitor that floats in a sheet of tempered glass. Lenovo Group Ltd., best known for the ThinkPad laptops popular for business users, this week is introducing a consumer notebook line called IdeaPad that features frameless displays and red, black and blue cases with raised and woven textures.

Sony's Vaio line now includes "eco edition" notebooks with leopard-print exteriors. The company introduced a pink model about two-and-a-half years ago, and since then says it has sold more Vaios in pink -- popular with young women -- than any other hue.

[Via The Wall Street Journal]

do you remember this?
http://www.thinkdigit.com/forum/showthread.php?t=77046
OP

No, I don't. I don't really visit the forums much these days.

What point were you trying to make?

You gave been GXified

Alienware has been making beautiful looking machines long before Mac Pro or Macbook came into existance, but no it was Apple who innovated good design.

aryayush said:
No, I don't. I don't really visit the forums much these days.

What point were you trying to make?
Click to expand...

just that just like the thread I pointed out, where you guys were debating weather beauty or brains count in guys,(and saurav was all for l00ks) the same point is raised here too. We need functionality more than looks. Given A gold coloured PC @ 30k and a normal black PC with the same config @ 25k, I would naturally prefer the later and use the money saved to buy something useful like ram.
OP

Yeah, but not every monkey exhibits the same behaviour and not all human beings have similar tastes.

Like most other technologically inclined people, I was also all for getting the maximum bang for the buck and squeezing out that last megahertz of performance out of every penny I spent. But my MacBook Pro changed my perspective and showed me how good looks go a long way in not only differentiating yourself from the crowd (which is always a good thing) but also inspiring you in ways a beige box never could. In more ways than one, it gives you far more value for your money that that 0.1% of speed ever could. We wear good looking clothes, stylise our hair and buy good looking vehicles. What's wrong with wanting the same traits from a machine you spend a major portion of your life using?

Good looks, though less important than the overall performance, definitely do count when you're buying a computer. Of course, it would be stupid to buy something prohibitively expensive just because it looks good but spending an extra buck to get a beautifully designed machine is a wise decision IMHO.

@Everyone,
Please don't make any stupid comments about how I bought my very expensive Mac just for the looks alone. Looks were the last thing on my mind when I bought it. Only after I bought it did I start appreciating the design and the value it added. The reason Macs are preferred by people, and Apple can afford to sell them at a premium, is and always has been Mac OS X.

The article above seconds my opinion too:

In the process, they're hoping to compensate for factors over which they have little control, such as software options. Unlike Apple, famous for its easy-to-use operating system and other original programs, PC makers largely rely on Microsoft Corp. for the underlying software. And that company's latest version of Windows, called Vista, has been panned by some reviewers, despite healthy sales.
Click to expand...

Well different colors does not mean good looks to me, but i must admit that the new pcs from HP have get me drooling!!
The ones mentioned over here - http://www.thinkdigit.com/forum/showthread.php?t=77248

Would not mind spending extra for them!! Just wish i could..