I am sure many of u already know of this Virtual reality system by now, but if you don't-you're missing out on something awesometacular. Well, here's an introduction.

Seriously, it amazed the hell out of me when I first saw it. It's still in beta stages, but Youtube already has many videos of people trying different games on it. 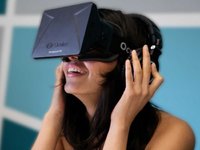 This is true immersion. Better visuals, audio like it's actually going on around you. Hell, the Horror genre may finally be piss-your-pants scary again.

They are turning down the latency of the screens to decrease onset of motion sickness.

I also saw a video of Mirror's Edge on OR. Now that was BLOODY AWESOME. And scary.

This is really a cool Idea. but this is what I have seen in kinect as well. moreover I have seen a news where a university students created a similar thing two years before.

Because playing farmville in 2D is too mainstream