Last few months I have seen a few posts on this forum where Airtel FTTH users wanted to use their own router in place of one provided by Airtel. Some were fighting with Airtel to set up Bridge mode, some eventually settled for Access Point mode.
The device these days provided by ISPs with their FTTH setup is in fact an ONT with WiFi Router integrated, in general being called as fiber modem or fiber router by everyone. These devices may not be as feature rich as traditional Ethernet WAN port based routers available from brands like TP Link Dlink Asus etc. To use your good quality feature rich Ethernet router ‘full-fledged’ in such a setup ideally is to put ISP’s fiber router in Bridge Mode whereby its routing function gets disabled and it’s more or less like a dumb ONT.

My Airtel Internet at Pune has finally been migrated from Ethernet to FTTH. I received GX Titanium-2122A fiber router. Your FTTH and GPON partner - GX Group | European quality It’s quite unlocked but lacks some very basic features! Here are steps how to put this device in Bridge Mode. I did such setup on a BSNL FTTH connection with their DBC router at my relative’s place but this one was even much much simpler.

In NET -> WAN Setup you will have 2 connections under Connection_Name, one for Internet & another for Voice. Select your Internet VLAN connection from the drop down. Now the next drop down is Gateway Type – Options are Route (Default) or Bridge.
Select Bridge. Now the Bearer_Service auto changes from TR069_Internet to just Internet. That’s normal.

DHCP Server gets enabled automatically. Just uncheck that. Also In dropdown named Bridge Mode below, it will auto select PPPoE_Bridge as default. Leave that as it is because Airtel uses PPPoE.
While BSNL’s DBC router additionally required LAN Port binding, this device did not.
So, apply the changes and reboot the router. That’s it!

Optionally Disable DHCP Server in Net -> LAN options and disable WiFi as they have no role to play. However, if you are not an advanced user, leave DHCP running as it will be easy to connect back to this device later if you wish to, say to revert it back to Routing mode.
Plug a LAN cable from any of the LAN ports of 2122A to WAN port of your ethernet router. Now setup your own ethernet router full-fledged including PPPoE Internet connection, DHCP, WiFi and all advanced WAN dependent features that you may be interested in. Now it’s your own Ethernet router front ending ISP’s Internet WAN. Voice remains unaffected and will continue to be handled by the fiber router.

Without making any alterations in ISP router you can always setup your own router in AP mode, if you just want Internet or extend the range, however then most of the WAN dependent features & some advanced features are lost in your router. 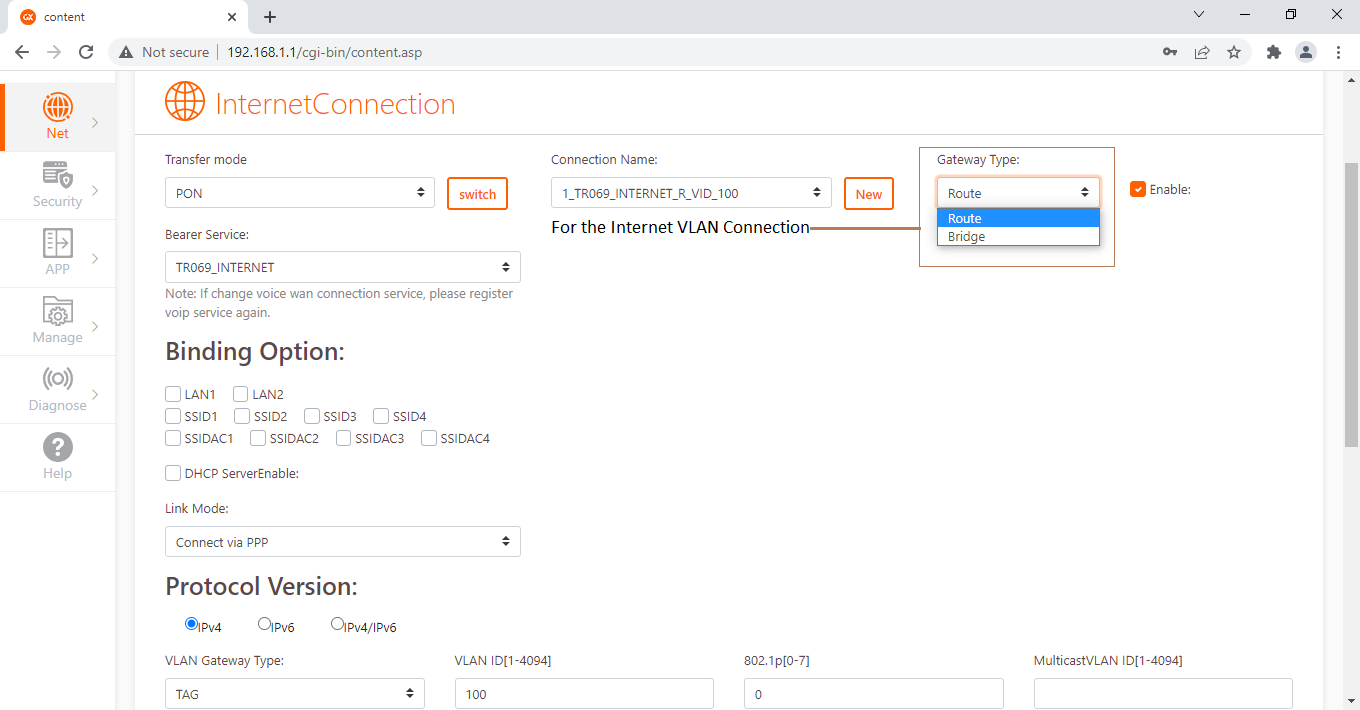 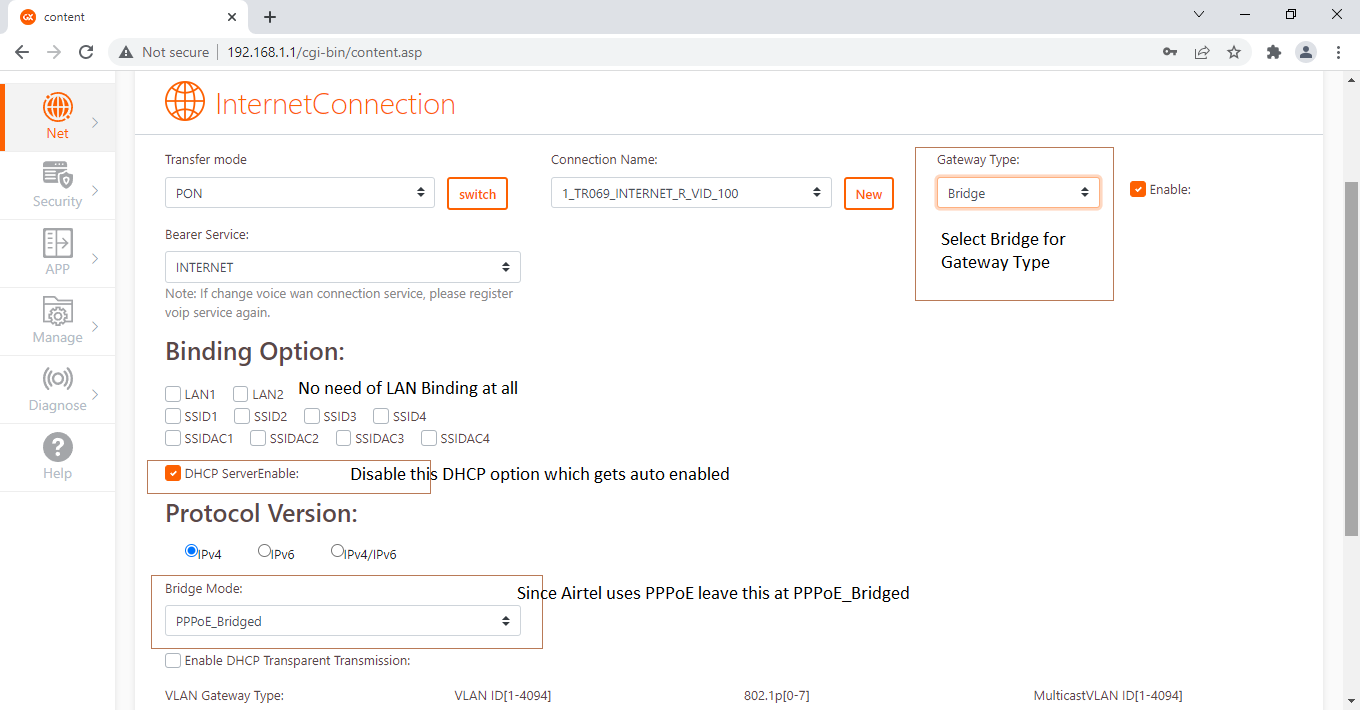 senpai8267 said:
Hy I have this same exact router I want to know what's the purpose of the usb port in this router as it's not have any storage or ftp option
Click to expand...

Its functionality is hidden/locked behind oem firmware which is Airtel in this case. Router companies usually don't manufacture a separate router for their oem clients & instead just take an existing model as base & disable certain features of it via software as per client's specifications.

whitestar_999 said:
Its functionality is hidden/locked behind oem firmware which is Airtel in this case. Router companies usually don't manufacture a separate router for their oem clients & instead just take an existing model as base & disable certain features of it via software as per client's specifications.
Click to expand...

Thx for the reply dude but do you know where can I find its firmware.
W

senpai8267 said:
Thx for the reply dude but do you know where can I find its firmware.
Click to expand...

You can't, at least not publicly. You need to have some inside source in Airtel who can provide a secret firmware to unlock all functionality assuming the router manufacturing company also provided such secret firmware to Airtel.

P.S. Above is assuming you want a firmware that can unlock hidden features, if you want a typical official firmware update then Airtel should provide at least one version in a few months/year.

@senpai8267 The main purpose of writing that post on Bridge Mode was to overcome this limitation of ISP provided ONT router. The firmware is locked and it's custom made for an ISP by the vendor. You simply put that ONT in Bridge and virtually replace it with you own good quality feature rich router which does WAN front ending and all router's heavy lifting, so you get want you want.

In fact in my case, I noticed some design issues with that 2122A so I made a lot of noise to the manufacturer GMX (even though it's B2B) and to Airtel and finally I got ZXN brand which is much better than that. I don't have 2122A anymore so won't be able to check out anything on your comment.

senpai8267 said:
Thx for the reply dude but do you know where can I find its firmware.
Click to expand...