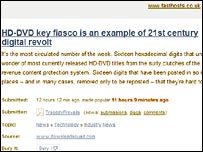 Readers did not 'dig' censorship

Attempts to gag the blogosphere from publishing details of a DVD crack have led to a user revolt. The row centred on a 'cease and desist' letter sent by the body that oversees the digital rights management technology on high-definition DVDs.
It requested that blogs and websites removed details of a software key that breaks the encryption on HD-DVDs.
The removal of the information from community news website Digg was a step too far for its fans.
As quickly as stories relating to the issue were removed, they were re-submitted in their thousands, in an act described by one user as a "21st Century revolt".
The site collapsed under the weight of the attack at one point.
Angry hacker 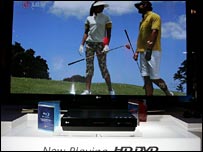 
The founder of Digg has now decided not to censor the information, telling users: "If we lose, then what the hell, at least we died trying".
Digg is a community-based news site with an emphasis on technology stories. Unlike traditional websites, editorial control is governed by users, who rank stories themselves.
Its combination of social bookmarking and blogging have made it popular and it now accounts for 1% of the total internet traffic in the US.
The controversy it has become embroiled in centres on a decision by the Advanced Access Content System Licensing Administrator (AACS), the consortium behind the DRM for HD-DVD disks, to gag websites and bloggers that published information about a software key that disables the copyright protection on the discs.
In a letter to a variety of websites and blogs the AACS requested that information relating to the crack be removed.
It said sites were "providing and offering to the public a technology, product, service, device, component, or part thereof that is primarily designed, produced, or marketed for the purpose of circumventing the technological protection measures afforded by AACS".
It goes on to say that doing so contravenes the US Digital Millennium Copyright Act and therefore "violates the rights of the AACS".
The issue with encryption first emerged at the end of last year when the AACS admitted that a hacker had bypassed security on some HD-DVD titles.
The hacker, known as muslix64, has been able to access the encryption keys which pass between certain discs and the player.
Once those keys have been obtained the disc can be stripped of its encryption enabling the digital content to be played on any machine.
The hacker said he had grown angry when a HD-DVD movie he had bought would not play on his monitor because it did not have the compliant connector demanded by the movie industry.
Since then links to the original crack and information about it has steadily been leaking out on the web.
The latest leak, causing the uproar, is of a key which unlocks all HD-DVD movies produced to date. The key was found and leaked by a hacker called Arnezami.
Some bloggers - including well-known web activist Cory Doctorow - have decide to remove the information in light of the AACS letter.
Others, in defiance of the orders, are openly posting the key on their websites or linking to the website detailing the original crack.
Digg rebellion
Initially, news website Digg decided to remove stories referencing the key.
"Whether you agree or disagree with the policies of the intellectual property holders and consortiums, in order for Digg to survive, it must abide by the law," chief executive officer Jay Adelson told readers.

Users, angered by the censorship, were determined to keep the story about the encryption-breaking code in the headlines which prompted a hasty change of heart by the website.
"After seeing hundreds of stories and reading thousands of comments, you've made it clear. You'd rather see Digg go down fighting than bow down to a bigger company.
We hear you, and effective immediately we won't delete stories or comments containing the code and will deal with whatever the consequences might be," said founder Kevin Rose.
The debate has put the initial crack and, what some see as the heavy-handed tactics of the licensing authority to combat it, back in the headlines.
It will also spark a fresh debate on how far user-generated content can be censored.