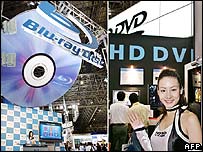 The two formats are battling for long-term supremacy

The backers of the Blu-ray high definition DVD system have received a twin boost in their ongoing format war with HD DVD.

Best Buy - the US's largest consumer electronics chain - has announced it is to recommend that its customers choose Sony's Blu-ray format. Its shops will carry HD DVD but Blu-ray will be displayed more prominently. And online video rental company Netflix said it would phase out its HD DVD stock and exclusively offer Blu-ray.


Studio backing
Netflix has become the US's largest company in a fast-growing field - DVD rental by mail - and announced a year ago that it had made its billionth DVD delivery after just eight years in business.

It has stocked both Blu-ray and HD DVD since the formats came on the market in early 2006 but said it had been prompted to reconsider this after a majority of the major Hollywood studios came out in favour of Blu-ray.
Walt Disney, Sony Pictures, Twentieth Century Fox, Warner Brothers and MGM are the studios that have endorsed Blu-ray. Paramount and Universal Studios publish their high-definition DVDs in Toshiba's HD DVD format.

The company also said the reality was that not many customers were ordering HD DVDs. "From the Netflix perspective, focusing on one format will enable us to create the best experience for subscribers," it said in a statement.

Netflix's rival Blockbuster said last June that it planned to stock only Blu-ray titles in its 1,450 US stores.

Best Buy's decision was explained by its president and chief operating officer Brian Dunn, who said: "Best Buy has always believed that the customer will benefit from a widely accepted single format that would offer advantages such as product compatibility and expanded content choices.
"Because we believe that Blu-ray is fast emerging as that single format, we have decided to focus on Blu-ray products."

The battle between HD DVD and Blu-ray has echoes of the rivalry between Betamax and VHS in the 1980s over which was the better video format for customers. Although both competed side-by-side for several years, the cheaper VHS format eventually won total dominance of the market.
Click to expand...

BTW, I am a supporter of PS3 & Blu-Ray. Looks like HD-DVD is going down the drain & Microsoft will now have to start shipping Blu-ray Discs & Players for the XBox 360 very soon.

bluray will win although I hate both for DRM.

I guess it's all for the best.

Thanks for the info
Blu-Ray rocks