Do you mind clubs pumped by oil money?

Today, all the big clubs like Chelsea, Man City, PSG and even club like Monaco which recently spend huge sum of money, are investing money from the owner's pocket. Few years back, Manchester City was just a small club and Manchester Derby was not so big as everyone knew what will be the result of the match. Arsenal was the favorite club whenever North London Derby happened(still its the favorite) but recently Hotspur has spend a lot of money and have really good players and a team which can really give a fight for Champios League Spot. Chelsea, who spent more than 100 million euros in 3 years to bring the forwards in their team. PSG, the owners are Qatar Investment Authority bring in the Ibrahimovic and then Cavani, were only big team in France but past two season what they did in UCL we all know.

Also i will mention about Real Madrid, one of the biggset club in football world, is known for buying the player once he is established. They signed Zinedine Zidane, Ronaldo, David Beckhamm, Raul, Cristiano Ronaldo when they were already star. The club is releasing every year about how much they are in the debt but then they spend the amount of money in transfer window which most of us believe is absurd for any player(100m for Bale!).

Few people say its not the way a soccer governing body should work. A club should only spend what they earn from their marketting, ticket sales etc. Which seems to be done by Arsenal. Here I am talking only big clubs. Arsenal first big signing is Ozil thats all. Arsenal is the club known for buying a young player and then nourish him to make him a big star in football world(Henry!). Borussia Dortmund is also doing the same. Arsenal fans are always proud of how their club works and how rubbish it is of other clubs to spend money which is coming from their owners. Is Arsenal also going to follow that? Why or Why not? I think they will follow this trend.

In wikipedia I read a club president cannot spend more/other than the club earns through its sales and marketting. What about the owners?

So I call every football fan here on TDF and talk about
1. is it right spending money which is not coming from the club's earning but from oil or other sources.
2. Isn't there any rule about how and how much a club should spend?
3. Is that legal to spend money other than what club earns?
4. Or why the hell does it matter when the club owners itself are giving their money to the club to buy players?

My knowledge is limited in this field cause I am new to how the club works. If anything is wrong here then correct me please.
G

I don't have much knowledge on how the clubs get their money to spend.

But I think, It'd be pretty boring if there were many regulations on clubs spending money & everyone were non-spenders. Watching Real Madrid that time with all star players was one of the best things on TV.

So to answer your questions, as long it keeps the game entertaining let them spend from whatever other legal sources.
OP

Finally...! Thank you [MENTION=154968]Gen.Libeb[/MENTION]. Very good thought you have. And I totally agree with, seeing galacticos was one of the best thing in football.
But, arsenal fans have always problem with this. I want to know why.
OP

Sorry. Saying like that to arsenal fans was cry to get people in discussion. Cause I want to know more about this. I support only arsenal in EPL. Real Madrid mainly
Where are the people, arsenalgunners, klaw, lfc_fan etc

Staff member
Let's go to the root of this problem.

Earlier, the old European Cup was a pure knockout tournament which only the CHAMPIONS played.

But the thing is, a Borussia Dortmund vs Arsenal match is going to get you more TV revenue than say Arsenal vs Aalborg BK.

So what does UEFA do? The Champions League.

You'll have 4 teams qualifying from England, Spain, Germany etc. More money for UEFA. More money for the clubs in these leagues. The rich get richer, the poor get poorer. You will never see Red Star Belgrade winning the Champions League now.

6 years back I used to have a huge problem with sugar daddy clubs, it is an issue but tbh there are bigger things which need to be fixed. If a club has to rise, investment needs to happen.

One more after effect of the "Champions League qualification money" is, clubs start to treat qualification as a 'trophy'. I'm quoting Wenger here.

This is a great blog. http://swissramble.blogspot.in/ You really need to see how the clubs in Spain are at a huge disadvantage when compared to Real Madrid and Barcelona. See the Television revenue distribution of La Liga. Clubs over there have to negotiate individually which is WRONG. 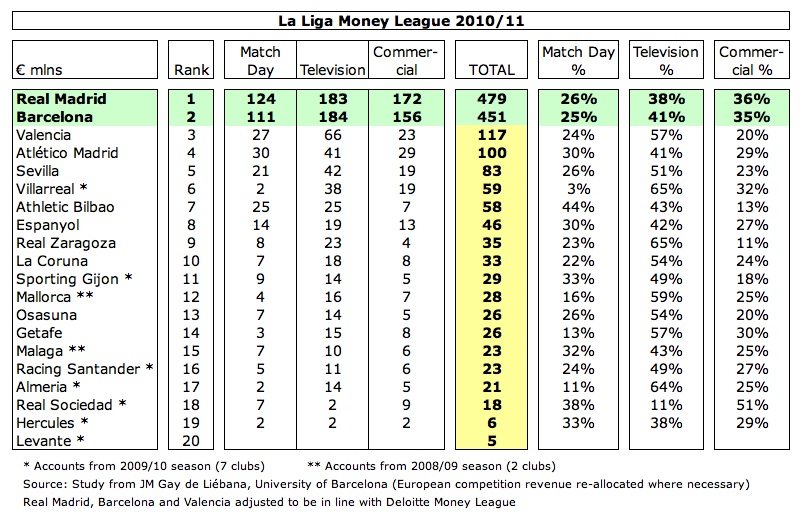 Thank you @ico for coming up with real facts and stats.
I gone through almost whole blog, but couldn't understand more than 10%. All I understood was how arsenal was saving money for their long term future goals and how much money FIFA made during World Cup2010 leaving the host country in huge debt.
I couldn't understand how the revenue thing worked and figures were for expenses.
Seems like its all about money. The footballs club's and association's head and their committees are just their in for business rather than promoting football. The members of associations say "money is needed to promote the sport" but whatever they do is well planned strategies to make money.
I am all new to this and recently started reading about these things so I might be wrong. Please forgive and correct me.

6 years back I used to have a huge problem with sugar daddy clubs, it is an issue but tbh there are bigger things which need to be fixed. If a club has to rise, investment needs to happen.
Click to expand...

1. What did you mean by bigger things?
2. So now you say, what clubs like AS Monaco and PSG did recently is all good/fair/justified to other clubs?
Just asking opinions.


You really need to see how the clubs in Spain are at a huge disadvantage when compared to Real Madrid and Barcelona. See the Television revenue distribution of La Liga. Clubs over there have to negotiate individually which is WRONG.
Click to expand...

I didn't understand the figures provided. What is 'match day', 'television' and 'commercial' are?
Is that la liga table is related to below EPL table by any means?

lightningfassst said:
I didn't understand the figures provided. What is 'match day', 'television' and 'commercial' are?
Is that la liga table is related to below EPL table by any means?

Revenue is the total money which the club receives.

The Total column in your picture should be only compared with the Television column in the picture I posted.

What you posted is Television revenue (and division) of Premier League clubs.
OP

Ok...thank you [MENTION=26711]ico[/MENTION].I am sorry this discussion right now is more like lessons, but I'll catch up.Day before yesterday I read that PSG and man city are susceptible of losing champions league spot cause they violate the UEFA's Fair Finance Play. http://m.bbc.com/sport/football/27198306

Dunno about you guys but Football Leagues should adopt NBA's drafting system. That way there is equal distribution of talent(at least by a small margin)

ico said:
6 years back I used to have a huge problem with sugar daddy clubs, it is an issue but tbh there are bigger things which need to be fixed. If a club has to rise, investment needs to happen.
Click to expand...


CarlonSamuels said:
^As the next season will be the first wherein the punishment for not following the FFP rules will be applied i think it is highly unlikely that any club will be banned from playing in Europe
And the offers stated in that article will probably be a fine + Squad restrictions/Points deduction/Inability to field a newly signed player
Click to expand...

This is what's happening, actually. ManCity have been fined £50M and had their squad size limited. Now within that squad size, UEFA has the requirement that each club must have 8, I think, homegrown players. So now, effectively, some of their stars might have to sit out CL games to accommodate homegrown players if this punishment goes through.
You must log in or register to reply here.
Share:
Facebook Twitter Reddit Pinterest Tumblr WhatsApp Email Share Link
Top Bottom