AMD plans to offer more than Intel in the $50 CPU market.

Last year, AMD released its first Ryzen-based Athlon, the 200GE, delivering performance levels that are competitive with Intel's Pentium series for $55. This was a great product from AMD, offering an affordable entry point into AMD's AM4 ecosystem and competition at the $50ish CPU market.

For starters, AMD's new Athlon 3000G will offer users a 300MHz clock speed boost over last-years Athlon 200GE, as well as the performance benefits of AMD's Zen+ core design. Add that to AMD's $49 SEP pricing, and the budget CPU market has a lot to be excited about.

The Athlon 3000GE is now available and support both CPU and memory overclocking. Add this to AMD's inclusion of a 55W cooling solution, and users of this processor should be able to achieve enhanced performance levels with ease.

This processor is designed to be a Pentium killer, offering consumers low pricing, support for both CPU and memory overclocking; features that Intel's Pentium series lacks. Combine this with better out of the box performance (at least in AMD's testing) and AMD's on to a winner.

In the UK, AMD's MSRP of $49 translates to £49.99 at most UK retailers, delivering buyers tow capable cores and Vega 3 graphics for less than most 300-series compatible Intel processors. With this processor, AMD plans to deliver PC builders more for less. 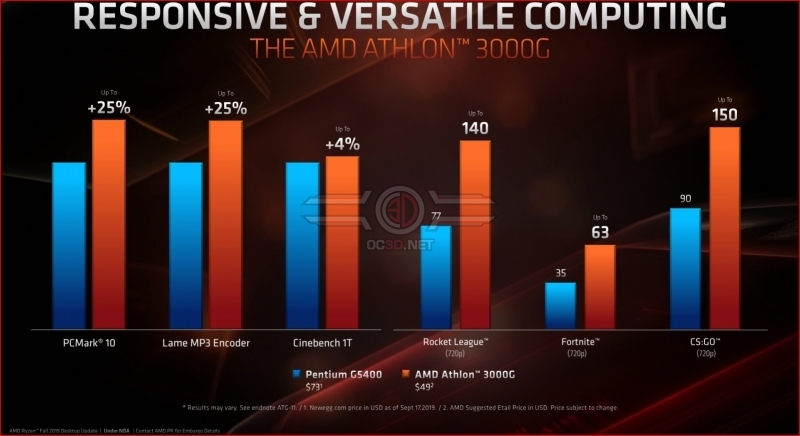 With the 3000G, AMD is offering buyers a processor that's the "only unlocked option in its segment". In AMD's labs, the company managed to overclock their sample to 3.9GHz, granting users a respectable performance bump over the CPU's stock 3.5GHz performance. 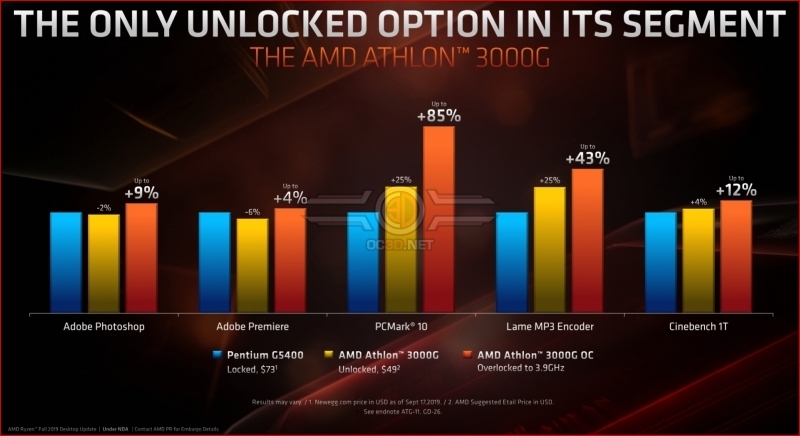 While this processor doesn't have the same appeals as AMD's new Ryzen 9 3950X or Ryzen Threadripper 3rd Generation processors, the Athlon 3000G highlights AMD's desire to outcompete Intel in all segments of the desktop PC market. The 3000G looks like a cracking CPU for under $50, and it is a great addition to AMD's AM4 product ecosystem.